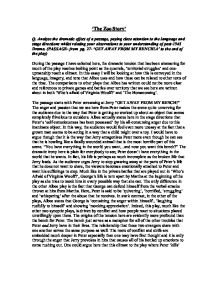 The Zoo Story' Q. Analyse the dramatic effect of a passage, paying close attention to the language and stage directions whilst relating your observations to your understanding of post-1945 Drama

'The Zoo Story' Q. Analyse the dramatic effect of a passage, paying close attention to the language and stage directions whilst relating your observations to your understanding of post-1945 Drama. (PASSAGE- from pg. 27- 'GET AWAY FROM MY BENCH!A' to the end of the play) During the passage I have selected here, the dramatic tension that has been simmering for much of the play reaches boiling point as the quarrels, 'territorial struggles' and one-upmanship reach a climax. In this essay I will be looking at how this is conveyed in the language, imagery, and tone that Albee uses and how these can be related to other texts of the time. The comparisons to other plays that Albee has written could not be more clear and references to private games and battles over territory that we see here are written about in both 'Who's afraid of Virginia Woolf?' and 'The Homecoming'. The passage starts with Peter screaming at Jerry "GET AWAY FROM MY BENCH!" The anger and passion that we see here from Peter makes the scene quite unnerving for the audience due to the way that Peter is getting so worked up about an object that seems completely frivolous to outsiders. Albee actually states here in the stage directions that Peter's 'self-consciousness has been possessed' by his all-consuming anger due to this inanimate object. ...read more.

It's the same as I do. But you're lost in it" Jerry and Teddy both accuse their rivals of being lost in the games and private battles that they are indulging in when in fact, they are as much to blame as the people that they target. The build up of dramatic tension is a big part of Albee's play here and it becomes especially important as it reaches its climax. For example, when Jerry gets the knife that he has out of his pocket, the play seems to have reached its peak and end. In fact though, Albee is being very clever here in the way that he makes us think that this is going to be the finish to the play when it is in fact the start to a crescendo of emotion that we are going to experience over the next three pages. This therefore makes the real ending even more shocking when it actually arrives. The ways in which Albee builds up and releases the dramatic tension in this scene especially is very skilful. Much like in the scene in 'Who's Afraid of Virginia Woolf?' when George comes into the room with a double barrelled shotgun, aims it at Martha's head and pulls the trigger, we see the same sort of quick crests and troughs in tension in 'The Zoo Story'. ...read more.

Peter's comportment is very different. Throughout the play we see a certain reserved attitude; even at the end of the play, he holds his knife in a defensive way and never wants to make the bold, more aggressive move. He is said to 'back off a little', 'hesitate' and 'retreat' during the passage, which are made to seem like quite unattractive traits, compared to the brash, lovable-rogue and sometimes outrageous personality that Jerry boasts. In this passage and the rest of the play, the main thing that Albee tries to do is explore the dramatic tension of the arrival of an 'outsider' as seen in the other synoptic plays with Teddy, Ruth, Nick and Honey. Albee explores the social and cultural boundaries of the 1950's in 'The Zoo Story' and makes some very intuitive remarks about preconceptions that some people have towards other. In capturing a very normal and quotidian scene, the audience can really relate to some of the messages that Albee gives in regards to human beings' failure to connect and communicate with each other. However, Albee also deliberately tries to shock and provoke the audience in some of the ideas that he gives us during the play. Whilst some of the social boundaries may have changed since the time of publication, the issue of murder, suicide and euthanasia still rages today and in its own way the play confronts a very taboo topic whose dramatic impact will never be lessened over time. ...read more.