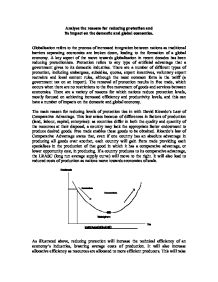 Analyse the reasons for reducing protection and its impact on the domestic and global economies.

Analyse the reasons for reducing protection and its impact on the domestic and global economies. Globalisation refers to the process of increased integration between nations as traditional barriers separating economies are broken down, leading to the formation of a global economy. A key aspect of the move towards globalisation in recent decades has been reducing protectionism. Protection refers to any type of artificial advantage that a government gives to its domestic industries. There are a number of different types of protection, including embargoes, subsidies, quotas, export incentives, voluntary export restraints and local content rules, although the most common form is the tariff (a government tax on an import). The removal of protection results in free trade, which occurs when there are no restrictions to the free movement of goods and services between economies. There are a variety of reasons for which nations reduce protection levels, mostly focused on achieving increased efficiency and productivity levels, and this can have a number of impacts on the domestic and global economy. The main reason for reducing levels of protection ties in with David Ricardo's Law of Comparative Advantage. This law arises because of differences in factors of production (land, labour, capital, enterprise): as countries differ in both the quality and quantity of the resources at their disposal, a country may lack the appropriate factor endowment to produce desired goods. ...read more.

This has boosted the long term efficiency of our firms and industries. Reduced protection levels and structural change has increased international competitiveness, as it has meant the Australian economy can produce goods and services at lower costs, increasing overseas demand for exports and reducing consumer reliance of imports. It has also meant a greater variety of products for consumers, as companies previously unable to compete in the local market due to protection can now compete. Within Australia, the number of car models available for purchase has risen from 75 in 1985 to 250 today. With this has also come cheaper prices for goods, bringing higher standards of living and improved customer service. Reduced protection levels in Australia has also led to higher productivity growth: Australia's productivity growth during the 1990s averaged 3% (as opposed to 2% in the 1980s), largely a result of reduced protection levels. Australia's economic growth rates have also been high, averaging over 3% for much of the 1990s (above OECD average) and currently standing at 2.5% for 2005-06. Embracing free trade has meant that our trade flows have changed dramatically; our trade dependence has increased 10% since 1968, indicating that X and M are now a greater proportion of aggregate demand, where AD = C + I + G + (X - M). ...read more.

In contrast, global protection levels remain high in the agricultural sector, severely affecting developing countries and exacerbating inequality. The WTO has failed to make progress on issues of development in the Doha Round of trade negotiations. Though the Doha round made it easier for developing countries to obtain cheap pharmaceuticals, agricultural protection remains high and the recent trend towards bilateral and regional free trade agreements has been accelerated. This has done little to help smaller developing economies from accessing rich countries' markets, and has therefore entrenched global inequalities. Reduced protection can also result in environmental degradation. Overseas producers may be able to produce some items cheaply because they do not have to comply with the environmental standards in advanced economies. However, some progress was made on this issue at the 2001 WTO Doha Ministerial Conference, in which the members of the WTO agreed to include environmental standards on the negotiation table for the Doha trade round. This means countries are able to impose import restrictions on goods produced using environmentally damaging practices. In conclusion, reduced protection levels have had enormous impacts on both the domestic and global economies. As protection levels continue to decrease under pressure from the WTO, the competitiveness, efficiency and productivity of both domestic and global economies will continue to increase. ...read more.