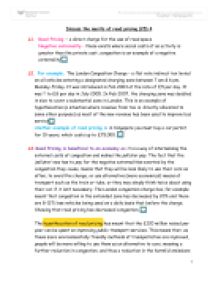 Discuss the merits of road pricing (25)

Discuss the merits of road pricing (25) 4 L1. Road Pricing - a direct charge for the use of road space Negative externality - these exists where social costs of an activity is greater than the private cost, congestion is an example of a negative externality L2. For example, The London Congestion Charge - a flat rate indirect tax levied on all vehicles entering a designated charging zone between 7 am & 6 pm, Monday-Friday. It was introduced in Feb 2003 at the rate of �5 per day. It was ? to �8 per day in July 2005. In Feb 2007, the charging zone was doubled in size to cover a substantial zone in London. This is an example of hypothecation (a situation where revenue from tax is directly allocated to some other purpose) as most of the new revenue has been used to improve bus services Another example of road pricing is in Singapore you must buy a car permit for 10 years, which costs up to �75,000. L3. Road Pricing is beneficial to an economy as it is a way of internalising the external costs of congestion and makes the polluter pay. The fact that the 'polluter' now has to pay for the negative externalities exerted by the congestion they cause, means that they will be less likely to use their cars as often, to avoid the charge, or use alternative (more economical) ...read more.

By at producing Y, the price paid increases to P1 and the quantity produced falls to Q1. Private costs now = social costs. The polluter now pays and the externality has been internalised. If congestion decreased due to road pricing, it means that there is less damage done to the roads as less people are wearing them down in traffic jams, causing damage by going too fast when they are late for work due to congestion and less crashes happen as people are less stressed and no longer have to wait in traffic jams so may not have to speed to get to work. This means less revenue needs to be spent on crashes, accidents, on average costs the government in 1999 �3billion. It also means that less government revenue needs to be spent on repairing the damaged roads. This means that the opportunity cost the government faced previously of having to spend more on road maintenance and crashes, can now be spent on more beneficial things, such as playgrounds & youthclubs. Another benefit from road pricing is that it generates more revenue for the government, meaning that not only can that revenue (e.g. �120million a year from the London Congestion Charge) be hypothecated and spent on improving public transport, some of it can also be used to improve other parts of the economy e.g. education services and healthcare. Road pricing will create employment for the economy, e.g. ...read more.

These will also cost the government time and money It depends on the size of the charge, for example if it is very little people will not be bothered and congestion levels will not change. It also depends on the size of the fine that they must pay, if it is very little, e.g. 50p they wont be bothered to pay. It also depends on the duration of the charge, if for example it lasts one or two months, it will not have a significant effect on congestion levels in the long run, but just for those periods of time, meaning the change is not sustainable It depends where the zones are that use the charge, if it is a very small area in the countryside, where they never had any congestion in the first place, it will have no effect. The zone must also be a place that cannot be avoided, as if road users can avoid the zone, the congestion will just move to those roads. It is very hard to determine the areas where the congestion charge is most needed, as congestion is very hard to measure. C -To conclude, congestion charging is more beneficial than not, as it can control congestion in heavily congested areas and encourage the use of more environmental methods such as public transport and raise government revenue at the same time. The benefits outweigh the drawbacks ?? ?? ?? ?? Katie Easter Homework 1 ...read more.

****
Some very good points here. The evaluation at the end is particularly strong and the writer makes a good case for congestion charging. They have not researched sufficiently into existing and proposed schemes where the use of technology overcomes many of the problems raised.