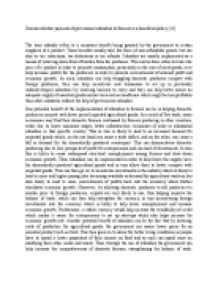 Transfer-Encoding: chunked ﻿Discuss whether payment of government subsidies to farmers is a beneficial policy [12] The term subsidy refers to a monetary benefit being granted by the government to certain suppliers of a product. These benefits usually take the form of non-refundable grants, but can also be tax reductions, tax deductions or tax refunds. Subsidies are usually implemented as a means of relieving some form of burden from the producers. This can be done either to lower the price of a product in order to promote consumption, particularly in the case of merit goods, or to help increase profits for the producers in order to promote reinvestments of retained profit and economic growth. As such, subsidies can help struggling domestic producers compete with foreign producers, they can help incentivise new businesses to set up in previously underdeveloped industries by lowering barriers to entry and they can help better assure an adequate supply of essential goods and services such as healthcare which might be less profitable than other industries without the help of government subsidies. ...read more.

Furthermore, a stable currency would help increase the availability of credit which makes it easier for entrepreneurs to set up start-ups which also helps increase the economic growth rate. Another potential benefit of subsidies can be the fact that by lowering costs of production for agricultural goods, the government can assure lower prices for an essential product such as food. This then goes on to allow for better living conditions as people have to spend a lower proportion of their income on food and as such can spend more on satisfying their other needs and wants. Thus, through the use of subsidies the government can help increase the competitiveness of domestic farmers, strengthening the balance of trade, lowering unemployment and incentivising investments, while also helping lower the prices of food and similar essential goods which then leads to an improvement in the living conditions. However, there are certain drawback associated with the use of subsidies. ...read more.

Thus, while subsidies can have many potential benefits for the economy, they come with a high opportunity cost which must be taken into account, they will raise the tax burden which can slow economic growth and they end up interfering into the free market which can hurt the price mechanism?s ability to effectively dictate the allocation of resources. Overall, I believe that subsidies to farmers can be very beneficial to the economy, however, this would only be the case if the price elasticity of demand for agricultural goods is kept high in order to assure maximum benefit to the consumers from the lowered costs of production. The subsidies can also be highly effective at growing the economy, however, the government should regulate the spending of the grants in order to assure that they are spend appropriately on factors that would help improve the competitiveness of the industry such as capital goods, rather than simply being used to create a flat decrease in the cost of production. ...read more.