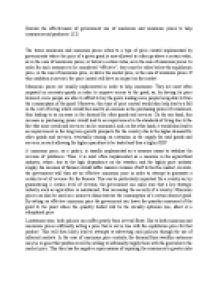 Discuss the effectiveness of government use of maximum and minimum prices to help consumers and producers. [12]

Transfer-Encoding: chunked ﻿Discuss the effectiveness of government use of maximum and minimum prices to help consumers and producers. [12] The terms maximum and minimum prices refers to a type of price control implemented by governments where the price of a given good is now allowed to either go above a certain value, as in the case of maximum prices, or below a certain value, as in the case of minimum prices. In order for such measures to be considered ?effective?, they must be either below the equilibrium price, in the case of maximum price, or above the market price, in the case of minimum prices. If this condition is not met, the price control will have no impact on the market. Maximum prices are usually implemented in order to help consumers. They are most often imposed on necessity goods in order to improve access to the good, as, by having its price lowered, more people are able to afford to buy the good, leading more people being able to from the consumption of the good. ...read more.

A minimum price, as a policy, is usually implemented as a measure meant to stabilise the revenue of producers. Thus, it is most often implemented as a measure in the agricultural industry, where, due to the high dependence on the weather, and the highly price inelastic supply, the incomes of farmers would suffer massive variance if left to the free market. As such, the government will then set an effective minimum price in order to attempt to guarantee a certain level of revenue for the farmers. This can be particularly important for a country as, by guaranteeing a certain level of revenue, the government can make sure that a key strategic industry such as agriculture is maintained, thus increasing the security of a country. Minimum prices can also be used as a means to disincentivise the consumption of a certain demerit good. ...read more.

Moreover, both policies will cause either excesses in demand or supply. Maximum prices will cause the quantity supplied to be insufficient to satisfy all customers, thus leading to various rationing methods having to be implemented. Similarly, minimum prices would cause an excess of supply leading to either unsold stocks which would hurt the producers or forcing the government to buy the excess products. Overall, due to their nature as a means of influencing a market outside of its natural operation, price controls are inherently unsustainable, and, as such, should only be implemented in the short term in order to solve an immediate issue, rather than as a means of permanently resolving an issue with a market. In the short term however, maximum prices will likely be very effective at allowing increased access to basic goods in times of crisis, thus massively benefitting the consumers, and minimum prices will allow suppliers with inherently unpredictable outputs such as farmers to stabilise their incomes. ...read more.