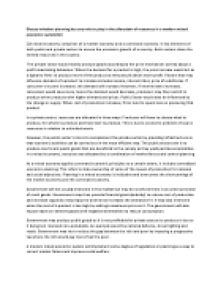 ﻿Discuss whether planning has any role to play in the allocation of resources in a modern mixed economic system(12) ZLA mixed economy comprises of a market economy and a command economy. It has elements of both public and private sectors to ensure the economic growth of a country. Both sectors share the limited resources in the country. The private sector would mainly produce goods according to the price mechanism as they adopt a profit maximizing behaviour. When the demand for a product is high, the price increase would act as a signal to firms to produce more of the product as they would obtain more profit. ...read more.

In a private sector, resources are allocated in three ways. Producers will have to choose what to produce, for whom to produce and how best to produce. This is due to economic problem of scarce resources in relation to unlimited wants. However, the public sector?s role is to complement the private sector by providing infrastructure so that economic activities can be carried out in the most efficient way. The public sectors aim is to produce merits and public goods that are beneficial to the society as they yield positive externalities. In a mixed economy, resources are allocated by a combination of market forces and central planning. ...read more.

to reduce cost of production and increase supply by reducing price and hence increases the demand of it. It may also intervene when the cost of a product is too high by setting a maximum price on it. The government will also impose taxes on demerit goods with negative externalities to reduce consumption. Government may produce public goods as it is not profitable for private sectors to produce it due to it being non rival and non-excludable. An example would be national defence, street lighting and roads. Government may try to reduce the gap between the rich and poor by imposing a progressive tax where the rich would pay more than the poor. A modern mixed economic system will implement some degree of regulation or planning as a way to correct market failure and improve social welfare. ...read more.