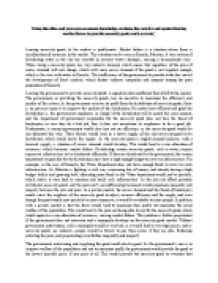 ﻿Using the video and your own economic knowledge, evaluate the case for and against leaving market forces to provide necessity goods such as water? Leaving necessity goods to the market is problematic. Market failure is a situation where there is misallocation of resources in the market. This situation can be seen in Karachi, Pakistan. A very system of distributing water in the city has resulted in extreme water shortages, causing a humanitarian crisis. Water, being a necessity good, has very inelastic demand, which means that regardless of the price of water, demand will not change, which will cause excess demand if the good is not supplied enough, which is the case with water in Karachi. The inefficiency of the government to provide water has caused the development of black markets, which further enforces inequality and inequity among the poor population of Karachi. Leaving the government to provide necessity goods is arguably more inefficient than if left to the market. ...read more.

This would lead to a mis-allocation of resources, which becomes market failure. Distributing certain necessity goods, such as water, require expensive infrastructure to be distributed efficiently. If they are distributed by the government, the certain department responsible for the distribution must have a high enough budget to invest in infrastructure. For example, in the case of Karachi, the Water Department does not have enough funds to invest in such infrastructure. As Pakistan is fighting a civil war, consuming lots of money, and already having a high budget deficit and growing debt, allocating more funds to the Water department would not be possible, which makes it very hard to maintain and build such infrastructure. As the rich can afford privately distributed necessity goods and the poor can?t, an inefficient government would perpetuate inequality and inequity between the rich and poor. In a private market, the excess demand and the threat of bankruptcy would cause the suppliers of the necessity good to adjust, increase efficiency and the supply, and even though the good would now possibly be more expensive, it would be available to more people. ...read more.

This would provide the necessity good to everyone that requires it, removing the problem of the poor not receiving the good, and as such, perpetuating equity and equality. A incorrupt and well-functioning government would be able to provide excellent infrastructure and a good service for distribution of the said necessity good, which could be better than a privately-provided one, as the government has much more funds available than a private firm. In conclusion, a necessity good provided privately would be better or worse than provided by a government very much depending on the government. An inefficient, corrupt government would be horrible for providing a necessity good ? for example, Pakistan is completely unable to provide water to the residents of Karachi, a poor country at war does not posses the resources to provide water ? but a rich, western country would be much more capable of providing water to its residents. This leads to the conclusion that private markets for necessity goods are only better in poor, underdeveloped countries, as in a rich country the government would be much better. ...read more.