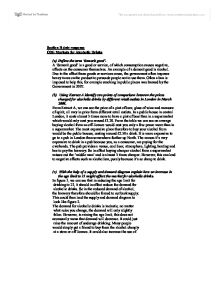 Section B data response Q26: Markets for Alcoholic Drinks (a) Define the term 'demerit good'. A 'demerit good' is a good or service, of which consumption causes negative, affects on the consumer themselves. An example of a demerit good is alcohol. Due to the effect these goods or services cause, the government often imposes heavy taxes on the product to persuade people not to use them. Often a ban is imposed to help this, for example smoking in public places was banned by the Government in 2007. (b) Using Extract A identify two points of comparison between the prices charged for alcoholic drinks by different retail outlets in London in March 2008. From Extract A, we can see the price of a pint of beer, glass of wine and measure of spirit; all vary in price from different retail outlets. In a public house in central London, it costs almost 3 times more to have a pint of beer than in a supermarket which would only cost you around �1.20. ...read more.

So in the reduced demand of alcohol, the brewery therefore should be forced to cut back supply. This could then lead the supply and demand diagram to look like figure 2. The demand for alcoholic drinks is inelastic, no matter what rules you change, the demand will only slightly falter. However, in raising the age limit, this does not necessarily mean that demand will decrease. It could just raise the amount of underage drinking. Many people would simply get a friend to buy them the alcohol cheaply at a store or off licence. It could also increase the use of fake ID, so in effect it's raising crime. The market for Alcohol could try and advertise to an older target market, to fill in the gap in the market for demand from age 18 to 21. They could use new product developments which will appeal to this market. (d) Evaluate possible economic policies other than increasing the age limit, that a government may use to reduce significantly the consumption of alcoholic drinks. ...read more.

The government could also tackle the problem through tax. In increasing the tax, it should make the demand decrease, which in time will bring the amount of supply down. Therefore reducing alcohol consumption and the tax could be used on crime caused by alcohol or the promotion of not drinking it. The use of fake ID's is relatively high, so if the government came up with a new ID card which had a special proof of some kind, such as the queen's head on a twenty pound note, then it would make it hard for younger people to use fake ID as a way of buying illegal alcohol. This would therefore effect in a reduced demand of alcohol. The main problem is the availability of cheap booze which is damaging the nation's health. Alcohol is now responsible for several types of cancer. If the government make it harder for younger people to buy the alcohol. Overall, we can see that increasing the age limit for alcohol is only one of the many options available to the government. I believe the most effective would be education, although it would take a long time, it has a long term effect and benefit. Which would greatly benefit future generations. ...read more.