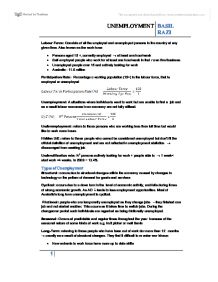 Labour Force: Consists of all the employed and unemployed persons in the country at any given time. Also known as the work force * Persons aged 15 +, currently employed ? at least one hour/week * Self-employed people who work for at least one hour/week in their own firm/business * Unemployed people over 15 and actively looking for work * Australia : 11.5 million Participation Rate: Percentage o working population (15+) in the labour force, that is employed or unemployed Unemployment: A situations where individuals want to work but are unable to find a job and as a result labour resources in an economy are not fully utilised. Underemployment: refers to those persons who are working less than full time but would like to work more hours Hidden U/E: refers to these people who cannot be considered unemployed but don't fit the official definition of unemployment and are not reflected in unemployment statistics ? discouraged from seeking job Underutilisation rate: N0 persons actively looking for work + people able to ? 1 week< start work <4 weeks. In 2009 = 13.4% Types of Unemployment Structural: occurs due to structural changes within the economy caused by changes in technology or the pattern of demand for goods and services Cyclical: occurs due to a down turn in the level of economic activity, and falls during times of strong economic growth. As AD ? leads to less employment opportunities. Most of Australia's long term unemployment is cyclical. Frictional: people who are temporarily unemployed as they change jobs - they finished one job and not started another. This occurs as it takes time to switch jobs. During the changeover period such individuals are regarded as being frictionally unemployed. Seasonal: Occurs at predictable and regular times throughout the year because of the seasonal nature of some kinds of work e.g. fruit picker or mall Santa Long-Term: referring to those people who have been out of work dor more than 12 months ? ...read more.

Extensive structural and microeconomic reform during this time period, also results in a worsening of the unemployment problem (increase structural unemployment). People who lost their jobs in declining industries found it difficult to obtain new jobs in the growth industries, and these job vacancies required higher or completely different skills. These structural changes were exemplified by the introduction of new technologies and production techniques. Post 1991 recession, there was a gradually decline in the unemployment rate, generating the longest continual economic growth in Australia's economic history i.e. 17 years. In 2008 unemployment dropped to 3.9% its lowest in 34 years. There was some disparity of unemployment rate between the states, with WA and QLD benefitting the greatest from the rapid growth of the mining industry, due to the high commodity prices. However, this extremely low unemployment rate was below our NAIRU and the shortages of skilled workers posed another problem. The 2008 GFC and resulting downturn in global economic activity in 2009 helped to reduce the demand for labour. It was estimated that unemployment would reach 8.5% by 2010/11 and would recover by 2011/12. Yet since Australia's labour force proved to be resilient, the Australian economic was not as affected as predicted and as a result the unemployment rate did not increase by much. Since the downturn, many firms were unwilling to let go of their workers as there was already a shortage of workers. Instead many people were switched from full-time to part time jobs, in effect increasing the underemployment. Therefore since underemployment is not counted in the unemployment figures, the unemployment rate is insufficient and masks some of the problems. To keep reducing the unemployment rate, Australia needs to achieve economic growth rates of more than 3.5%. This relationship between economic growth and the unemployment rate is explained by Okun's Law; to reduce unemployment, the annual rate of economic growth much exceed the sum of percentage growth in productivity plus the increase in the size of the labour force in any one year. ...read more.