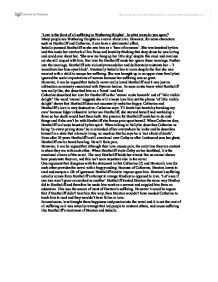 Love is the Root of all suffering in Wuthering Heights In what ways do you agree?

'Love is the Root of all suffering in Wuthering Heights'- In what ways do you agree? Many people see Wuthering Heights as a novel about love. However, for some characters such as Heathcliff and Catherine, it can have a detrimental effect. Isabella pursued Heathcliff as she saw him as a 'hero of romance'. She was besotted by him and this made her overlook all his flaws and brutality thinking that deep down he was loving and could care about her. 'She saw me hang up her little dog' despite this cruel and careless act she still eloped with him. Her love for Heathcliff made her ignore these warnings. ...read more.

Catherine and Heathcliff's love is very destructive. Catherine says 'I'll break two hearts by breaking my own' because Edgar refused to let her see Heathcliff, she starved herself and worked up a fever so her death would hurt them both. Her passion for Heathcliff leads her to do rash things and if she can't be with Heathcliff she forces pain upon herself. When Catherine dies, Heathcliff is always haunted by her spirit. When talking to Nelly he describes Catherine as being 'in every paving stone' he is reminded of her everywhere he looks and he describes himself in a state that is barely living, so much so that he says he is 'not afraid of death'. ...read more.

Hareton's suffering actually comes from Heathcliff's attempt to avenge Hindley as opposed to love. 'Let's see if one tree won't grow as crooked as another' Heathcliff treated Hareton the same way Hindley did to Heathcliff and therefore he made him work as a servant and crippled him from an education. This was the source of most of Hareton's suffering. However it could be argues that if Heathcliff didn't treat him this way, then Hareton wouldn't have needed Catherine to teach him to read and they wouldn't have fallen in love. In conclusion, love brought them happiness and passion into the novel and it is not the root of all suffering as it was actually revenge that led people to mistreat others, and cause suffering like Heathcliff's treatment of Hareton and Isabella. ?? ?? ?? ?? ...read more.