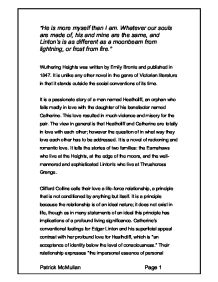 "He is more myself than I am. Whatever our souls are made of, his and mine are the same, and Linton's is as different as a moonbeam from lightning, or frost from fire." Wuthering Heights was written by Emily Bronte and published in 1847. It is unlike any other novel in the genre of Victorian literature in that it stands outside the social conventions of its time. It is a passionate story of a man named Heathcliff, an orphan who falls madly in love with the daughter of his benefactor named Catherine. This love resulted in much violence and misery for the pair. The view in general is that Heathcliff and Catherine are totally in love with each other; however the question of in what way they love each other has to be addressed. It is a novel of reckoning and romantic love. It tells the stories of two families: the Earnshaws who live at the Heights, at the edge of the moors, and the well-mannered and sophisticated Linton's who live at Thrushcross Grange. Clifford Collins calls their love a life-force relationship, a principle that is not conditioned by anything but itself. ...read more.

Impatiently, Catherine admits that she accepted his proposal. Aware that Catherine's feelings for Edgar lack honesty, Nelly states her opinion: Catherine "loves" Edgar because he is handsome, rich, and adores her; what further problem can there be? Catherine admits that her heart and soul tell her she is doing wrong. In truth, she reveals that she loves Heathcliff. However, since Hindley has a greater status, marrying him would degrade her as well. Therefore, she swears, "He will never know how I love him; not because he's handsome, but because he's more myself than I am." Unaware that Heathcliff has been listening in on their conversation, the two women are shocked when this last statement causes him to run outdoors, Catherine is certain that he did not overhear her. Nelly, however, warns Catherine that marrying Edgar means that she and Heathcliff will have lost their friendship forever. Catherine replies that Edgar must learn to put up with Heathcliff for her sake, and that by marrying him, she can even help Heathcliff by using Edgar's money to remove him from Hindley's power. Nelly does not agree with this idea. ...read more.

When Lockwood is departing, he hears that Hareton and Cathy plan to marry on New Year's Day. They are carrying on the love their parents had for each other and doing the one thing their parents never did by getting married. With reading the novel, I have come to the conclusion that Catherine's heart does not remain divided between Heathcliff and Edgar. With reading I feel that Catherine's heart has always been with Heathcliff, and remains with Heathcliff. In the novel all her feelings and love was described to have been described towards Heathcliff. She never really speaks in such a manner about Edgar. Both Edgar and Isabella both knew about the infatuation Heathcliff and Catherine had for each other, which is shown when Isabella finally runs away after Catherine passes away. I feel the best way to summarise the relationship with the pair is from this quote... "Soul mates, their love exists on a higher or spiritual plane; they are soul mates, two people who have an affinity for each other which draws them together irresistibly. Heathcliff repeatedly calls Catherine his soul. Such a love is not necessarily fortunate or happy. Heathcliff and Catherine represent the essential isolation of the soul, the agony of two souls-or rather, shall we say? Two halves of a single soul, forever struggling to unite" C. ...read more.