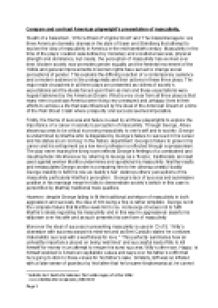 Compare and contrast American playwrights presentation of masculinity in Death of a Salesman, Whos Afraid of Virginia Woolf and The Glass Menagerie.

﻿Compare and contrast American playwright?s presentation of masculinity. ?Death of a Salesman?, ?Who?s Afraid of Virginia Woolf? and ?The Glass Menagerie? are three American domestic dramas in the style of Ibsen and Strindberg that attempt to explore the idea of masculinity in America in the mid twentieth century. Masculinity in the time of the plays? creation was defined by monetary and vocational success, physical strength and dominance, but clearly, the perception of masculinity has evolved over time. Modern society now promotes gender equality and the feminist movement of the 1960s and general improvements in women rights have served to change social perceptions of gender. This explains the differing reaction of a contemporary audience and a modern audience to the protagonists and their actions in these three plays. The major male characters in all three plays are presented as victims of society?s expectations and the ideals forced upon them as men and these expectations were hugely fashioned by the American Dream. What is very clear from all three plays is that many men in post war America were living very pressured and unhappy lives in their efforts to achieve a life that was influenced by the ideal of the American Dream in a time of the Wall Street Crash where prosperity and success seemed impossible. Firstly, the theme of success and failure is used by all three playwrights to explore the importance of a career in society?s perception of masculinity. Through George, Albee shows success to be critical in proving masculinity to one?s self and to society. George is undermined by Martha who is disgusted by George?s failure to succeed in his career and his status as an ?old bog? in the history department. George?s failure to grow in his career and his entrapment as a low level professor is reflected through expressionism. The play never leaving the living room reflects George?s feelings of a constrained and claustrophobic life Moreover by referring to George as a ?floozie?, traditionally an insult used against women Martha undermines and questions his masculinity. ...read more.

Masculinity in traditional America is impossible to achieve without sacrificing aspects of Masculinity. Furthermore the inability of the male characters to effectively communicate in all three plays is significant in present masculinity. Albee makes use of language in ?Virginia Woolf? to illustrate how masculine ideals prevent constructive rhetoric. Both George and Martha constantly insult each other rather than communicate, as a means of asserting power in their relationship. Certainly, Martha continuously undermines George?s masculinity by calling him a ?simp? and a ?floozy?. The verbal sparring between the two therefore becomes as A.Stanz suggests ?The struggle between the man who would not violate his personal integrity?[4] On the other hand, the inability to communicate is seen in the parent and child interactions in both ?D of S? and ?Glass Menagerie.? Throughout the play, Willy is unable to understand why ?Biff? has become lost. In the greatest country in the world.? It is only at the end of the play like ?Virginia Woolf? where honest communication breaks through, for Willy exclaims ?Biff he likes me!? This revelation undermines Willy?s masculinity as he was incompetent when attempting to communicate with his son. Moreover masculinity is also presented to be defined by power and authority in contemporary America. Albee presents George as having masculine power and authority in his relationship through the structure of the play. As a naturalistic play, ?Who?s Afraid of Virginia Woolf? consists of an extremely complex structure consisting of the games that George and Martha engage in. Despite the fact that the childish nature of the games is illustrated through the use of alliteration such as ?Get the Guests?, they are in fact much more sadistic than their title suggest. This becomes clear in the way the structure of the play moves from the unassuming ?Fun and Games? towards the apocalyptic ending of ?Exorcism? and is vital in ascertaining George?s masculinity. In spite of his being constantly undermined in sexual games such as ?Hump the Hostess? played by Nick and Martha, George asserts his masculine power through the competitive games played throughout the play. ...read more.

The pattern is echoed in Martha and Honey, whose fathers? wealth and prestige led, in great part to their marriages. Nick and George seem to regret the amount of power and influence the men have (or had) over them. This shows the submissive nature and back seat role of both men in their marriages and as such a failure in masculinity. Both Albee and Miller use the form of the plays to present masculinity through the theme of truth and illusions. Albee demonstrates George?s masculinity by the end of the play as he was powerful enough to no longer need the lie of a child stating that ?It was?time.? As Baxandall states ?the tension between truth and illusion is at the heart of Albee?s plays.?[7] Clearly George, like Biff, faces reality and this honesty and bravery demonstrates his masculinity by ending the illusion. To conclude, it is evident that all three playwrights present the fact that masculinity is unbelievably complex in American society. Despite the fact that many ideals of American masculinity such as strength and success retain their importance in modern society?s definition of masculinity, modern audiences will understand that masculinity no longer remains a rigid formula but is in fact a complex ideal. For example many metrosexual activities are now accepted as typical masculine behaviour such as piercing ears or wearing hair product. Certainly all the plays suggest the complexity of masculinity with the pressures of their society cause damaging effects on the family and the mental health of men. Page ________________ [1] Cardullo, Bert: Death of a Salesman: The Swollen Legacy of Arthur Miller www.columbia.edu/cu/cjas/june_miller.html [2] Finkelstein, Bonnie Blumenthal: Albee?s Martha; Someone?s Daughter, Someone?s Wife, No One?s Mother? American Drama 5 1995 [3] McDonough, Carla J.: Staging Masculinity: Male Identity in Contemporary American Drama 2006 [4] Stanz, Anita: Edward Albee: A Poet of Loss 1978 [5] T.Eagleton: Sweet Violence [6] Carson, Neil: Arthur Miller, May 2008 [7]Baxandall, Lee: The Theatre of Edward Albee, 1965 ...read more.