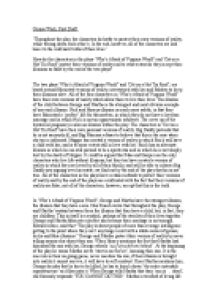 How do the characters in the plays Whos Afraid of Virginia Woolf and Cat on a Hot Tin Roof protect their versions of reality and to what extent do they accept their illusions as false by the end of the two plays?

which they are loved by all of their family, and will be able to coheres Big Daddy into signing over his estate; we find out by the end of the play that his is not true. All of the characters in the plays have certain methods to protect their versions of reality and by the end of the plays are confronted with the fact that their versions of reality are false; not all of the characters, however, accept that this is the truth. In ?Who?s Afraid of Virginia Woolf?, George and Martha have the strongest illusion, the illusion that they have a son. Don Shiach wrote that throughout the play, George and Martha ?sustain between them the illusion that they have a child, but, in fact, they are childless. This in itself is a symbol, perhaps of the sterility of their lives together.? George and Martha fabricate a perfect son because their marriage is not enough. ...read more.

George tells her his reasons for killing the child, ?You broke our rule baby, you mentioned him?. The finishing sequence of the play is arguably the only honest part of it. George tells Martha that ?It was ? time? and ?It will be better?. At the very end of the play George and Martha are left alone on stage and George sings ?Who?s afraid of Virginia Woolf? to which Martha replies ?I ? am.? The meaning of the ?Who?s afraid of Virginia Woolf? phrase which is repeated throughout the play, has been argued by many critics. Albee himself has answered the question; it ?means who?s afraid of the big, bad wolf, which means who?s afraid of living life without delusions?? Albert Wachtel argues that ?By substituting a bisexual feminist writer for a more generally threatening enemy, Albee confronts his audience with more pointed fears: Animal death still lurks behind the title, augmented by the bold and frightening challenges represented by Woolf?s honesty, experimentation, and suicide.? ...read more.