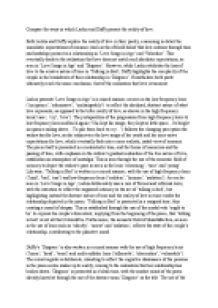 Compare the ways in which Larkin and Duffy present the reality of love.

ï»¿Compare the ways in which Larkin and Duffy present the reality of love. Both Larkin and Duffy explore the reality of love in their poetry, examining in detail the unrealistic expectations of romance (such as the oft-held belief that love endures through time and hardship) present in a relationship in ‘Love Songs in Age’ and ‘Valentine’. This eventually leads to the realisation that love does not match such idealistic expectations, as seen in ‘Love Songs in Age’ and ‘Disgrace’. However, while Larkin attributes the loss of love to the erosive nature of time in ‘Talking in Bed’, Duffy highlights the complicity of the couple in the breakdown of their relationship in ‘Disgrace’. Nonetheless, both poets ultimately reach the same conclusion- that of the realisation that love is transient. Larkin presents ‘Love Songs in Age’ in a mixed manner, as seen in the low frequency lexis (‘incipience’, ‘submissive’, ‘unchangeably’) to reflect the idealised, abstract nature of what love represents, as opposed to the bitter reality of love, as shown in the high frequency lexis(‘case’, ‘cry’, ‘love’). The juxtaposition of the progression from high frequency lexis to low frequency lexis and back again (‘She kept her songs, they kept so little space…Its bright incipience sailing above…To pile them back to cry…’) follows the changing perception the widow has for love, as she rediscovers the love songs of her youth and her once-naïve expectations for love, which eventually fade into a more realistic, jaded view of romance. The poem itself is presented in a melancholic tone, and the theme of memories and the passing of time, with emphasis on the widow’s gradual realisation of the true nature of love, establishes an atmosphere of nostalgia. This is seen through the use of the semantic field of memory to depict the widow’s past, as seen in the lexis ‘relearning’, ‘time’ and ‘young’. Likewise, ‘Talking in Bed’ is written in a mixed manner, with the use of high frequency lexis (‘kind’, ‘bed’, true’) ...read more.

The extended metaphor of the couple?s house as a representation of their relationship is further shown in ?To a bowl of apples rotten to the core. Lame shoes empty in the hall??. Here, the symbolism of ?a bowl of apples rotten to the core? reflects the love between the couple as being completely and thoroughly ruined, with the adjective ?rotten? carrying negative connotations of the festering trouble between the two. The ?Lame shoes empty in the hall? are also used as a representation of the couple?s destructive romance, with the pair of ?lame shoes? echoing the couple and their inability to improve their now-meaningless relationship. Eventually, the persona in ?Disgrace? comes to the revelation of the inescapable destruction of love, as can be seen in ?But one day we woke to our disgrace?. Here, the use of the coordinating conjunction ?But? implies a sudden realisation of the destruction of their relationship, with the verb ?woke? carrying the double meaning of a physical waking as well as the acknowledgement of ?disgrace?, as love ceases to exist. This is further shown in ?And how our words changed. Dead flies in a web. How they stiffened and blackened?. It is interesting to note the comparison of ?Dead flies? to ?our words? by the persona, as the ?dead flies? are symbolic of death and a loss of vitality, echoing the persona?s comprehension of the loss of proper communication in her dilapidated relationship. The use of the ?web? as a metaphor for the couple?s relationship is especially significant as well, as it illustrates the sense of entrapment felt by the couple, much like the ?dead flies? caught ?in a web?. Such recognition of the state of the couple?s relationship is further seen in the last stanza; ?Woke to the meaningless stars?lost?. With the ?meaningless stars? as a symbol of lost hope, the dynamic verb ?woke? shows the couple?s growing realisation of the reality of the transient nature of love, with the adjective ?lost? depicting a sense of helplessness for ...read more.

of the verb ?spraying? mimicking a spray can as language becomes a violent act of vandalism when the couple loses control of their emotions, as they become relentless in their exchange of verbal abuse. A similar scene depicting the couple?s fight is seen as well as Duffy refers to ?Into the night with the wrong language, waving and pointing, the shadows of hands huge??. In particular, the dynamic verbs ?waving? and ?pointing? are an indication of the mutual blame present between the couple, with the noun phrase ?wrong language? highlighting the lack of understanding between the two whilst emphasising the loss of physical and emotional intimacy between them. The complicity of the couple is also shown in the last stanza; ??faithless, unpenitent, you and me both, lost?, with the pronouns of ?you? and ?me?, complemented by the adverb ?both?, showing the couple?s participation in the ruination of their relationship. The adjectives ?faithless? and ?unpenitent?, often seen in the semantic field of religion also shows a lack of trust, or faith present in the couple, that they have become wary and sceptical of each other. More significant, however is the use of enjambment in ?you/ and me?, which Duffy uses to illustrate the emotional and physical distance between the two. In the end, the couple is ?lost?, both having to face the reality that their own actions caused the destruction of their relationship. Ultimately, both Larkin and Duffy share the same purpose of presenting the reality of love by destroying the common belief of its supreme powers through the portrayal of the unmet expectations of romance. However, this is presented in a different manner: in Larkin?s poetry, he points to the erosive nature of time that leads to the loss of love, implying that its pursuit is hopeless, whereas Duffy?s poetry shows that the couple?s own actions are to blame, and carries the more optimistic message that love, although a worthy quality, should be handled carefully. Word Count w/quotes: 3307 Word Count w/o quotes: 2696 ...read more.