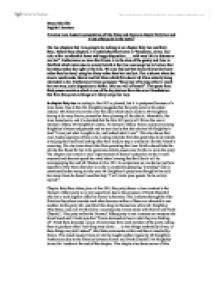 Examine Jane Austen's presentation of Mrs Elton and Emma in chapter forty two and at one other point in the novel?

Examine Jane Austen's presentation of Mrs Elton and Emma in chapter forty two and at one other point in the novel? The two chapters that I am going to be looking at are chapter forty two and forty three. Before these chapters, it is established that Emma is "handsome, clever, and rich, with a comfortable home and happy disposition......with very little to distress or vex her". Furthermore we learn that Emma is in the class of the gentry and lives in Hartfield which intern due to society beliefs at the time encourage her to believe that her status makes her right all the time. We also find out that Emma follows her heart rather then her head, using her fancy rather then her intellect. This is shown when she tries to match make Harriet and Mr Elton which fails due to Mr Elton actually being interested in her. Furthermore Emma possesses "the power of having rather to much her own way, and a disposition to think a little too well of herself". This quote from third person narration which is one of the key devices from the novel foreshadows that from this point on things will likely not go her way. In chapter forty two an outing to Box Hill is planned, but it is postponed because of a lame horse. Due to this Mr. Knightley suggests that the party come to his estate instead. Mrs Elton tries to take over this idea which intern leads to Mr Knightley having to be very firm to prevent her from planning all the details. ...read more.

During this dialogue Mrs Elton is constantly trying to take over the party from Mr Knightley. "It is my party. I will bring my friends with me". This quote said by Mrs Elton like many others is rejected by Mr Knightley who has to be very "firm" to make Mrs Elton see that it is not her party. Although Mrs Elton persists to help Mr Knightley which could be interpreted as a positive of her character it is more likely she is striving for attention. Also at the end of this dialogue Mrs Elton still believes that Mr Knightley has created the party for her "I am fully sensible of your attention to me in the whole of this scheme. You have hit upon the very thing to please me". Which indicates her lack of education and that she is desperate to be accepted by the gentry. Another example of her lack of education is when Jane Fairfax will not accept her offer to be her friend's governess "she positively refused to take her negative". This discussion like the one with Mr Knightly, which although could be seen as a friend trying to help a friend is more likely to be Mrs Elton just wanting to get her way. One more example of dialogue used by Mrs Elton is when she says "I wish we had a donkey". This quote is said after Mr Knightley rejects her help for the last time and can be seen as an example of when Mrs Elton has nothing to say, she just says nonsense. ...read more.

Which intern suggests that Mr Knightley who was with her throughout the previous chapter has a good effect on Emma. In this chapter Emma and Frank play up to societies opinions and flirt with each other even though they both are not interested in one another. The superficial relationship between Emma and Frank is made clear when Emma actually admits they are "talking nonsense". The quote "Emma could not resist" shows that Emma has returned to her old ways and has began to follow her fancy rather then her head again. Due to this following of her fancy she insults Mrs Bates "Ah! ma'am, but there may be a difficulty. Pardon me, but you will be limited as to number only three at once." This insult causes Mr Knightley to teach her, her final lesson "Were she a women of fortune, I would leave every harmless absurdity to take its chance......but, Emma, consider how far this is from being the case". Due to this lesson we are shown that Emma's education is nearly complete and that Emma is finally learning to put her intellect before her fancy. In conclusion both chapters portray Mrs Elton and Emma in contrast. Chapter forty two shows Emma in a good light while Mrs Elton is seen "parading" and gossiping throughout. While in chapter forty three Emma is seen to be the one who acts improperly as she insults Mrs Bates and shows her superficial relationship with Frank Churchill. Mrs Elton on the other hand sees how pointless it is to play Franks game and does not participate. ?? ?? ?? ?? Hasan Khalifah English Literature ...read more.