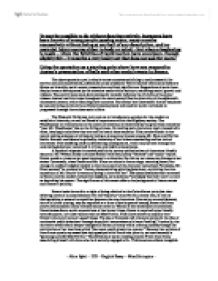 show how you respond to Austen's presentation of balls and other social events in Emma.

'It may be possible to do without dancing entirely. Instances have been known of young people passing many, many months successively without being at any ball of any description, and no material injury accrue either to body or mind: - but when a beginning is made - when the felicities of rapid motion have once been, though slightly felt - it must be a very heavy set that does not ask for more.' Using the quotation as a starting point show how you respond to Austen's presentation of balls and other social events in Emma. The above quotation put in simple terms connotes socializing to not be essential for survival yet once experienced, addictions can be produced. This is implied within Jane Austen's Emma as hinted by social events presentation and their significance. Suggestions of such views display human development by the mistakes made within society to encourage moral growth and wisdom. The central focus upon balls and social pursuits indicates the triviality of the upper classes. Austen's satirical tone throughout the novel exemplifies the hierarchy of the eighteenth nineteenth century, while ridiculing their concerns. The author has illustrated a further emphasis by concentrating particularly on Emma's development and need for social awareness as progressed through the various social affairs. ...read more.

Elton, a woman she can not stand. During this gathering much commotion is taken up by party guests, predominantly by Mr. Knightely, about Jane's "venture." Austen can be seen to be ridiculing society as characters take much interest upon a minority issue of visiting the post office. Jane shows a "little blush" of running "such risks" while reserving her manners regardless to the invasion of her privacy. Consequently the time period within the novel compels Jane's consistence and Mr. Knightley's courtesy to be purely based upon concern for her health. Adoptions of significance still withstands similar to the previous events, and allow development of future plots such as the suspicion formed upon Miss. Fairfax's behaviour. The great Crown Inn Ball had been postponed several times creating much enthusiasm and excitement for the people of Highbury. This is an indication of the emptiness of their lives. Being the first formal social gathering due to Mrs. Elton's arrival, social codes would advocate her to have central focus. This angers Emma as "her taste was not the only taste which" was to be depended upon. Nevertheless Emma masks her true judgement by appearing to appeal to all those around her. Dancing was seen as a metaphor of courtship as Emma encounters this "flirtation between her and her partner" Frank, others may view them as having a more intimate relationship. Mr. ...read more.

Emma learns, with the help of Mr. Knightley's finger pointing, that she needs to concentrate on her own thoughts and actions rather than those around her. The limited use of action throughout the novel constructs social occasions to be at the focal point of the plot. Consistently, this reflects the artificialities of Austen's world which she wanted the reader to pick up upon. By exposing society's hypocrisy, due to the show of gestures, the satire acts a comedic tool for readers. Even though Emma's faults are chiefly stressed upon; the story reveals faults in other characterisations such as Mrs. Elton, Frank and Mr. Woodhouse. I feel the idea of concentrating heavily on, what would be considered by the modern reader, small concerns; Austen specifies the consequences of falling out of traditional practice. The juxtaposition of such problematic proceedings, ending with a minute ounce of happiness for Emma, makes the novel unique and intensifies the effect. Nevertheless the moral message overrides such views to allow the reader to learn from the mistakes of characters and the importance of maintaining a balance. This allows progression of readers to improve themselves and become more self-aware also. Finally, the use of misconception and confusion adds to the ironic use of satire to amuse spectators. ?? ?? ?? ?? - Abira Iqbal - 12D - English Essay - Miss Shrimpton - ...read more.