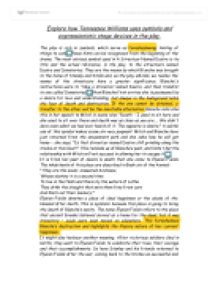 Explore how Tennessee Williams uses symbols and expressionistic stage devices in the play.

Explore how Tennessee Williams uses symbols and expressionistic stage devices in the play. The play is rich in symbols, which serve as foreshadowing; hinting of things to come. These hints can be recognized from the beginning of the drama. The most obvious symbol used in A Streetcar Named Desire is its title and the actual reference, in the play, to the streetcars named Desire and Cemeteries. They are the means by which Blanche was brought to the home of Stanley and Stella and, as the play unfolds, we realize the names of the streetcars have a greater significance. Blanche's instructions were to "take a streetcar named Desire, and then transfer to one called Cemeteries." When Blanche first arrives she is possessed by a desire for love and understanding, but always in the background lurks the fear of death and destruction. If the one cannot be obtained, a transfer to the other will be the inevitable alternative. Blanche indicates this in her speech to Mitch in scene nine: "Death - I used to sit here and she used to sit over there and death was as close as you are ... We didn't dare even admit we had ever heard of it. The opposite is desire." A subtle use of this symbol makes scene six very poignant: Mitch and Blanche have just returned from the amusement park and she asks how he will get home - she says, "Is that streetcar named Desire still grinding along the tracks at this hour?" ...read more.

However, a moth is grey - referring to Blanche's mistakes in the past and even to Allan Grey, whose suicide is the tragic flaw Blanche wants to overcome. It is also symbolic when Blanche has a bath - to purify herself from the past and get back the "innocence of the dream world". In scene 5, Stella spills some coke on Blanche's white skirt - this ties in with the idea of purity and ruination, especially when Blanche states that they were lucky because the skirt wasn't stained. This along with the cruder, sexual symbolism implied also foreshadows her rape. Moreover, the setting of the play refers to the issue of virginity. The French city Orleans is famous for Jeanne d' Arc, the Virgin of Orleans who was executed - referring to the sad ending of the drama when somebody will be sacrificed. Also, Blanche's birthday is in September; so she was born under Virgo, which is also a reference to the issue of purity. Williams also conveys emphasises on light and dark. The light represents truth and reality, which is both figuratively and literally revealed in Scene 9. In this scene the final confrontation between Mitch and Blanche occurs. Mitch complains the room is dark, and Blanche reveals that the dark is comforting to her. When Mitch tears the paper from the Chinese lantern, he allows it to produce a blinding light. ...read more.

vocabulary which is artificially calculated and constructed by her in order for her achieve her aims. This is especially true in this scene, since Blanche resorts once more to the educated speech of a school teacher in order to take control of an aggressive situation. The question on which character represents dark and who represents light is debatable, yet it seems that both light and dark contain both a softness and a harshness which is decided upon by the individual. However, with this in mind, it is certain that the relationship between them was destined to fail someday. The music in the background plays a key part in the play in describing Blanche's emotions. In fact at one point it says of Blanche that "The music is in her mind". The Blue Piano represents Blanche's desire and vulnerability. She is always extremely lonely and needs companionship. This music is apparent during scene one when she is recounting the deaths of her family at Belle Reeve, and when she kisses the newsboy in scene five. The music is the loudest during the scene when Blanche is being taken away to the asylum. The Varsouviana Polka represents death, and to Blanche immanent disaster. This music is heard as she explains the suicide of her husband in scene six. It is also in the background when Stanley gives her a Greyhound ticket to go home in scene eight. It also fades in and out of the scene where Mitch confronts Blanche about her true past. ...read more.

The writer identifies many important moments, but the style of this essay doesn't match the quality of its observations. With more quotation, terminology and contextual information, this could have been a top notch essay! ***