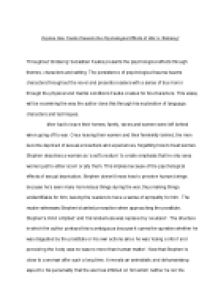 ﻿Explore How Faulks Presents the Psychological Effects of War in ?Birdsong? Throughout ?Birdsong? Sebastian Faulks presents the psychological effects through themes, characters and setting. The persistence of psychological trauma haunts characters throughout the novel and presents readers with a sense of true horror through the physical and mental conditions Faulks creates for his characters. This essay will be examining the way the author does this through his exploration of language, characters and techniques. Men had to leave their homes; family, wives and women were left behind when going off to war. Once leaving their women and their femininity behind, the men become deprived of sexual encounters and experiences, forgetting how to treat women. Stephen describes a woman as ?a soft creature? to create emphasis that he only sees women just to either scorn or pity them. This implies because of the psychological effects of sexual deprivation, Stephen doesn?t know how to perceive human beings because he?s seen many horrendous things during the war, thus making things unidentifiable for him; leaving the readers to have a sense of sympathy for him. ...read more.

Furthermore, its shows that the soldiers were so used to the ugliness of war and the naturalism of the mahogany presents to readers irony of how something that originates from natural substance could be estranged. When Weir returns, his body and mind has to get used to the ?denseness of the silence? that ?pressed his ears.? The metaphor ?denseness of the silence? shows readers how different the home front is, compared to that of how noisy the war was. The intertextuality of this shows readers that Weir feels out of place, suggesting he had become accustomed to war life. Leading from this, Weir feels psychologically out of place, like he is living in a different world with a sense of displacement. By constantly portraying the men as being dehumanised, Faulks presents this to the readers as a continuous perceptual construction of the war through the eyes of the soldiers. Through the entire novel, characters constantly think about death and how ?death had no meaning?. This metaphor of death to illustrate for the readers a sense of realism and a true insight to what the psychological effects of war were like; people feared death the most in life and now even this has become meaningless, especially to the ones who have seen their comrades severely injured or die during battle. ...read more.

Faulks explores her ignorance through Gray when she asked him ?Was he... funny? - Gray replies in a sardonic tone as ?Funny? It was war? highlighting her ignorance once more leading her to wish ?she hadn?t come? which shows her disappointment. All these negative psychological effects of her search soon turned to positivity and happiness. For instance, Elizabeth ?would repay the debt; she would complete the circle?. Evidently, this shows that through unlocking her past, she would feel a sense of achievement and complete wholeness, leaving no margins for bitterness or negativity. Overall, she had ?overcome her disappointment?; again showing the positive psychological effect and changes the information has been for her. Ultimately, war did corrupt the characters? minds at one point or another, showing the reality and the implacable horrors of war. Through writing this novel, Faulks allows his imagination, views and personal opinions to create the real devastation of how both men and women psychologically changed during and, arguably, after war. Faulks explores these psychological effects throughout ?Birdsong? to his readers so that they can get a true feeling about the idea of how both men and women coped with the war and how it affected their lives during and after. (Word count: 1,190) ...read more.