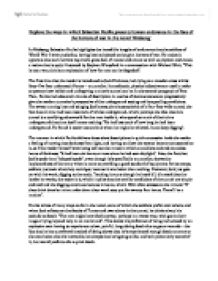 Explore the ways in which Sebastian Faulks presents human endurance in the face of the horrors of war in the novel 'Birdsong' In Birdsong, Sebastian Faulks highlights the incredible lengths of endurance that the soldiers of World War I were pushed to, having been subjected to the grim horrors of war. He makes it apparent that such horrors required a great deal of mental endurance as well as physical endurance, a notion that is aptly illustrated by Stephen Wraysford in a conversation with Michael Weir, "This is not a war, this is an exploration of how far men can be degraded". The first time that the reader is introduced to Jack Firebrace, he's lying on a wooden cross whilst forty-five feet underneath France - a tunneller. Immediately, physical adjectives are used in order to portray how hellish and unforgiving a miner's tunnel can be. In the second paragraph of Part Two, Faulks includes small chunks of description in a series of short sentences to progressively give the reader a tunneler's perspective of the underground setting and its appalling conditions. The sweat running into and stinging Jack's eyes; the claustrophobia of a four-foot-wide tunnel; the fact that all time had been lost track of whilst ...read more.

This shows his preference of being incinerated by an explosion over having to experience a slow, painful, languishing death due to gas or wounds - the fact that he has a preferred method of dying shows that he's experienced enough death to come to the conclusion that it's inevitable; he accepts that he's going to die, and isn't particularly scared of it, but would prefer to die a quick death. This is somewhat ironic, because Jack dies a long and painful death spanning a number of days after being buried alive with Stephen in Part Six. Even when Jack begins to eventually long for death, it still refuses to arrive swiftly, as shown when Stephen wakes Jack from unconsciousness, but "he could see Jack fighting to be free of him, desperate to shake off his last contact with the living world". Faulks made this happen to show that war is unfair, and also that the events of war can change a man to the extent that he'd rather die than have to return to ordinary life, which seems distant and unrealistic; "While a primitive fear kept stirring in him, the pain of his body and the lost illusions of his life made him wish for the conclusion to come". ...read more.

He was carrying a sword". Sebastian Faulks portrays the horrors of war in numerous ways; he describes the claustrophobia and intense heat and darkness of a tunnel; the realisation that death is inevitable and the unwise tacticians of the Battle of the Somme. Whatever situation soldiers are thrown into, though, it seems like they're able to adapt and endure it - like when Stephen is forced to carry a canary through the mines despite his crippling fear of birds. At first, Stephen is revolted by the idea of catching the canary, "He felt himself close to tears as he searched the murk of the clay", Faulks's use of the phrase "close to tears" makes Stephen seem childlike, but his determination to help his injured comrade spurs him on, and, unwilling to upset Weir by killing the bird, he literally grits his teeth and carries the bird to safety, "With teeth clamped very tight together he held out both hands to Weir, who released the bird into the handkerchief", possibly saving Weir's life in the process. However, a lot of soldiers endured their situations because the only alternative was a court martial, but the threat of the firing squad was enough to make most soldiers do practically anything for their country. Word Count: 1239 ...read more.