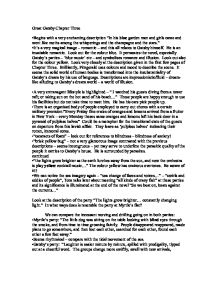 Great Gatsby Chapter Three � Begins with a very enchanting description "In his blue garden men and girls came and went like moths among the whisperings and the champagne and the stars." � It's a very magical image - romantic - and this all relates to Gatsby himself. He is an insatiable romantic. Look out for the colour blue. It permeates the novel, especially Gatsby's parties - 'blue music' etc - and symbolises romance and illusion. Look out also for the colour yellow. Look very closely at the description given in the first few pages of Chapter Three. Brilliantly, Fitzgerald uses colours and mood to describe the scene. It seems the solid world of human bodies is transformed into the insubstantiality of Gatsby's dream by his use of language. Descriptions are impressionistic/fluid - dream-like alluding to Gatsby's dream world - a world of illusion. � A very extravagant lifestyle is highlighted - " I watched his guests diving from a tower raft; or taking sun on the hot sand of his beach..." These people are happy enough to use his facilities but do not take time to meet him. ...read more.

When he had gone halfway he turned around and stared at the scene - his wife and Catherine scolding and consoling as they stumble here and there..." � Gatsby's party: "I looked around. Most of the remaining women were now having fights with men said to be their husbands. Even Jordan's party, the quartet from East Egg, were rent asunder by dissension. One of the men was talking with curious intensity to a young actress, and his wife, after attempting to laugh at the situation in a dignified and indifferent way, broke down entirely and resorted to flank attacks..." IMPRESSIONS OF THE PEOPLE AT GATSBY'S PARTIES? 'The air is alive with chatter and laughter, and casual innuendo and introductions forgotten on the spot, and enthusiastic meetings between women who never knew each other's name.' � Insincere, superficial, false, feign interest, vain, artificial, make grand gestures � '...they conducted themselves according to the rules of behaviour associated with an amusement park.' � Defines their frivolity and vulgarity at the same time. 'They were at least agonizingly aware of the easy money in the vicinity and convinced that it was theirs for a few words in the right key.' ...read more.

� Suddenly Nick is forced to notice the theatrical quality of Gatsby's smile. This will not be the last time that contradictions are evident when describing Gatsby - 'elegant' and 'roughneck' seem incongruous. Later Nick talks about Gatsby's 'pink rag of a suit.' Beneath the veneer of glamour/wealth/materialism Gatsby's past reveals a lesser social status, one which even now he is at pains to hide completely. At what points do we see Gatsby as an isolated figure? � Fitzgerald has delayed our introduction to Gatsby until this chapter. This is done to enhance our intrigue, the mystery and enigmatic quality of his character. Furthermore, it parallels the surrounding whispers and gossip he inspires from the party guests themselves. His persistence in remaining aloof and separate from his guests seems at odds with the lavish expenditure and effort gone into his parties. � His figure in Ch 3 - "...my eyes fell on Gatsby, standing alone on the marble steps and looking from one group to another with approving eyes." � The image of Gatsby's isolated figure is one which recurs throughout the novel. � Here he grows 'more correct as the fraternal hilarity increased.' ...read more.