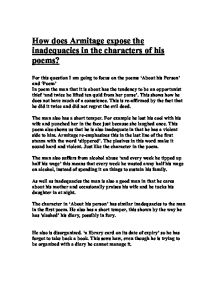 How does Armitage expose the inadequacies in the characters of his poems?

How does Armitage expose the inadequacies in the characters of his poems? For this question I am going to focus on the poems 'About his Person' and 'Poem' In poem the man that it is about has the tendency to be an opportunist thief 'and twice he lifted ten quid from her purse'. This shows how he does not have much of a conscience. ...read more.

Armitage re-emphasizes this in the last line of the first stanza with the word 'slippered'. The plosives in this word make it sound hard and violent. Just like the character in the poem. The man also suffers from alcohol abuse 'and every week he tipped up half his wage' this means that every week he wasted away half his wage on alcohol, instead of spending it on things to sustain his family. ...read more.

He also has a short temper, this shown by the way he has 'slashed' his diary, possibly in fury. He also is disorganized. 'a library card on its date of expiry' so he has forgot to take back a book. This sows haw, even though he is trying to be organized with a diary he cannot manage it. Armitage is extremely good at exposing their weaknesses with what the characters do as well as the language he chooses, i.e. the use of plosives and other things help the impression of the inadequacies come over. ...read more.