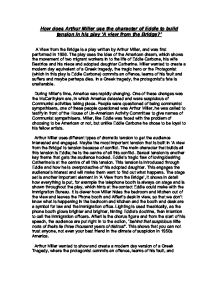 How does Arthur Miller use the character of Eddie to build tension in his play 'A view from the Bridge?'

How does Arthur Miller use the character of Eddie to build tension in his play 'A view from the Bridge?' A View from the Bridge is a play written by Arthur Miller, and was first performed in 1956. The play uses the idea of the American dream, which shows the movement of two migrant workers in to the life of Eddie Carbone, his wife Beatrice and his niece and adopted daughter Catherine. Miller wanted to create a modern day equivalent of a Greek tragedy, the tragic hero or the Protagonist (which in this play is Eddie Carbone) commits an offence, learns of his fault and suffers and maybe perhaps dies. In a Greek tragedy, the protagonist's fate is unalterable. During Miller's time, America was rapidly changing. One of these changes was the McCarthyism era, in which America detested and were suspicious of Communist activities taking place. People were questioned of being communist sympathisers, one of these people questioned was Arthur Miller, he was called to testify in front of the House of Un-American Activity Committee to give names of Communist sympathisers. Miller, like Eddie was faced with the problem of choosing to be American or not, but unlike Eddie Carbone he chose to be loyal to his fellow artists. Arthur Miller uses different types of dramatic tension to get the audience interested and engaged. Maybe the most important tension that is built in 'A view from the Bridge' is tension because of conflict. The main character that builds all this tension is Eddie; he is the centre of all this conflict. Sexual tension is another key theme that gets the audience hooked. Eddie's tragic flaw of loving/desiring Catherine is at the centre of all this tension. This tension is introduced through Eddie and how he is overprotective of his adopted daughter. This engages the audience's interest and will make them want to find out what happens. ...read more.

The arrangement enables the inside of the apartment, the street outside and Alfieri's office all to be represented without any scene changes. The area that is being used is cleverly lighted when needed, otherwise it will stay dark. The fact that the "main acting area is a worker's flat" hint the people we are about to meet are below par. "None of these interiors are seen" which is indicating the Kitchen and the bedroom makes the audience to try and guess at what is happening inside these interiors. The telephone booth is an important crop because there is always a light on it, while other places turn on and off, and as the play gets closer to the end, the booth glows brighter and brighter to signal Eddie's idea and then determination, to call the immigration bureau. At the start of the play the foghorn tells us where we are. Miller's intention was to create a modern day account of a Greek Tragedy and 'A View from the Bridge' is quite similar in the way it is structured. The word 'tragedy' refers primarily to tragic drama: a literary composition written to be performed by actors in which a central character called a tragic protagonist or hero suffers some serious misfortune which is not accidental and therefore meaningless, but is significant in that the misfortune is logically connected with the hero's actions. Tragedy stresses the vulnerability of human beings whose suffering is brought on by a combination of human and divine actions, but is generally undeserved with regard to its harshness. This genre, however, is not totally pessimistic in its outlook. Although many tragedies end in misery for the characters, there are also tragedies in which a satisfactory solution of the tragic situation is attained. Greek tragedies of Sophocles, Aeschylus and Euripides, were written about Grand Kings, Dukes or Generals because in their times, these individuals were thought to encompass or symbolize the whole person. ...read more.

Marco arrives in the street and calls Eddie's name, Eddie goes out to face him and he demands his name back from Marco. Marco calls him an "animal", and the fight scene begins. Eddie takes out a knife and "lunges" towards Marco, who grabs Eddie's arm and turns the knife back on him. It is symbolic how Eddie dies with his own knife. "The knife still in his hand". This is symbolic because he has destroyed himself with his own weapon, just like a Greek protagonist it was his fate to die this way. In the end Eddie dies in Beatrice's arms which symbolizes their reunion in the end. "Eddie: Then why-Oh, B.! Beatrice: Yes, yes! Eddie: My B.!" This shows their reconciliation of their battered relationship, with what Beatrice has been through, she still forgives him. Through out the play, Eddie dominates Beatrice, but in this tiny moment, Eddie needs, and the first time he honestly needs Beatrice. Through out the play we find that Beatrice is a forgiving character and that she has a "big heart." Also, Beatrice is the only female that needs Eddie. Catherine now, not in control of him, no longer seeks his approval; therefore Eddie is drawn back to Beatrice for the first time and seeks her approval and forgiveness. "Most of the time we settle for half and I like it better. Even as I know how wrong he was, and his death useless, I tremble, for I confess that something perversely pure calls to me from his memory-not purely good, but himself purely for he allowed himself to be wholly known... and yet, it is better to settle for half, it must be! And so I mourn him-I admit it-with a certain alarm." The whole man Alfieri defines in Eddie is the self interested man. Eddie's flurry within the play is completely motivated by his own desire at the expense of others. Thus, people have to act halfway to preserve the rules of the community and lives of others. ...read more.