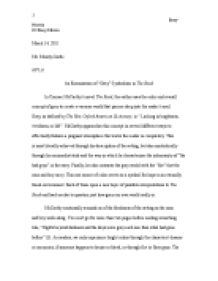 In Cormac McCarthys novel The Road, the author uses the color and overall concept of gray to create a vacuous world that pierces deep into the readers soul.

﻿Bray-Morris JD Bray-Morris March 14, 2011 Ms. Mundy-Castle AP Lit. An Examination of ?Gray? Symbolism in The Road In Cormac McCarthy?s novel The Road, the author uses the color and overall concept of gray to create a vacuous world that pierces deep into the reader?s soul. Gray, as defined by The New Oxford American Dictionary, is ? Lacking in brightness, vividness, or life?. McCarthy approaches this concept in several different ways to effectually fashion a poignant atmosphere that sucks the reader in completely. This is most literally achieved through his description of the setting, but also symbolically through his minimalist style and the way in which he characterizes the inhumanity of ?the bad guys? in the story. Finally, he also contrasts the gray world with the ?fire? that the man and boy carry. This one source of color serves as a symbol for hope in an eternally bleak environment. Each of these open a new layer of possible interpretations to The Road and lead us also to question just how gray our own world really is. ...read more.

Grimacing at the day. He pulled the boy closer. Just remember that the things you put into your head are there forever, he said. You might want to think about that (12). Not only is the imagery in the scene clear and powerful, but he also raises questions in the reader?s mind that reach beyond the man and boy. The passage pulls one?s own dark side and gray nature into the story. McCarthy leaves room for people to fill the ominous and colorless void with their own ideas and fears of darkness and numbness? He is asking: What do you have stuck in your head that you wish you never did? Finally, the dark epicenter of the novel is reinforced by the utter selfishness and lack of humanity that pervades the remainder of society; people turning on one another and reverting back to primal methods of survival of the fittest: Behind them came wagons drawn by slaves in harness and piled with goods of war and after that the women, perhaps a dozen in number, ...read more.

To the extent that the novel resonates with the real world, the message is the same: people like the boy always carry the fire. The truth, however, is that our world is shockingly similar the one in The Road, with far too many people seeming to choose self-preservation at the cost of genuine human concern for others. Our more complex world is not so simple as the tradeoff involved in killing others in order to survive, but McCarthy points out to us our human nature - the fire of human compassion is often extinguished when we encounter adversity. The world McCarthy immerses us in with The Road, is one that we can all too easily relate to. Through his potent style and choice of setting he gives us the tools to vividly construct an ultimately gray landscape and fill it with our own personal demons. His message about humanity?s inhumanity also adds a layer that we can compare to our own society. In effect, he not only places us in the shoes of the man and boy, but also transports our individual selves into the desolate environment along side that infamous road. ...read more.