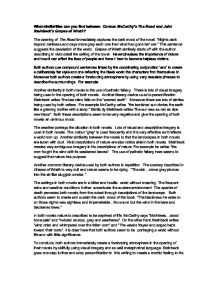 What similarities can you find between Cormac McCarthys The Road and John Steinbecks Grapes of Wrath?

What similarities can you find between Cormac McCarthy’s The Road and John Steinbeck’s Grapes of Wrath?

The opening of The Road immediately captures the dark mood of the novel. “Nights dark beyond darkness and days more gray each one than what had gone before.” This sentence suggests the desolation of the world. Grapes of Wrath similarly starts off with the author describing in vivid detail the setting of the novel. He emphasises the importance of nature and how it can affect the lives of people and force them to become helpless victims.

Both authors use compound sentences linked by the coordinating conjunction ‘and’ to create a deliberately flat style and one reflecting the bleak world the characters find themselves in. Moreover both authors create a foreboding atmosphere by using very desolate phrases to describe the surroundings. For example

Another similarity in both novels is the use of pathetic fallacy. There is lots of visual imagery being used in the opening of both novels. Another literary device used is personification. Steinbeck writes “the last rains falls on the “scarred earth”. Moreover there are lots of similes being used by both writers. For example McCarthy writes “the banished sun circles the earth like a grieving mother with a lamp.” Similarly Steinbeck writes “the sun was as red as ripe new blood”. Both these descriptions seem to be very negative and give the opening of both novels an ominous mood.

Another common literary device used by both authors is repetition. The scenery described in Grapes of Wrath is very dull and nature seems to be dying. “The rain…drove gray plumes into the air like sluggish smoke.”

The settings in both novels are in a bitter and hostile world without meaning. The frequent rains and weather conditions further accentuate the austere environment. The spectre of death pervades both novels from the outset through descriptions of the landscape. Both authors seem to create and sustain the dark mood of the book. “The blackness he woke to on those nights was sightless and impenetrable…No sound but the wind in the bare and blackened trees.”

In both novels nature is described to be deprived of life. McCarthy says “birchtrees…stood bone pale” and “twisted stumps, gray and weathered”. On the other hand Steinbeck writes “wind cried and whimpered over the fallen corn” and “The weeds frayed and edged back toward their roots”. It is clear here that both authors seem to be portraying a world without life and with little significance.

To conclude, both authors immediately create a foreboding atmosphere in the opening of their novels by skilfully using visual imagery and as well metaphorical language. Steinbeck goes one step further and adds personification in this writing to create a morbid feeling to his novel. The use of pathetic fallacy also adds to show the bleak and sinister atmosphere. The use of “dust” and “ash” also appear in both novels. Both authors use visual imagery to highlight the extent of the desolation of the wasteland they are describing.