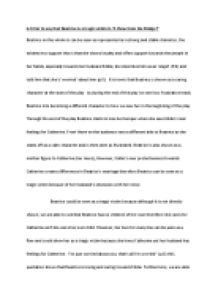 Is it fair to say that Beatrice is a tragic victim in A View from the Bridge?

﻿Is it fair to say that Beatrice is a tragic victim in ?A View from the Bridge?? Beatrice on the whole is can be seen as represented as a strong and stable character, the evidence to support this is that she shows loyalty and offers support towards the people in her family especially towards her husband Eddie; she describes him as an ?angel? (P.8) and tells him that she?s ?worried? about him (p.8). It is ironic that Beatrice is shown as a caring character at the start of the play as during the end of the play we see how frustration leads Beatrice into becoming a different character to how we saw her in the beginning of the play. Through the end of the play Beatrice starts to lose her temper when she sees Eddie?s real feelings for Catherine. From there on the audience sees a different side to Beatrice as she starts off as a calm character and is then seen as frustrated. Beatrice is also shown as a mother figure to Catherine (her niece); However, Eddie?s over protectiveness towards Catherine creates differences in Beatrice?s marriage therefore Beatrice can be seen as a tragic victim because of her husband?s obsession with her niece. ...read more.

This could question whether or not the couple actually have love between or if the relationship is just to show society if they are husband and wife. Also throughout the play the couple show no sign of love between them apart from Beatrice who throughout the novel tells him that she ?loves? him. This could suggest that Eddie does not love Beatrice and therefore that may be the reason as to why he is so affectionate towards Catherine. Conversely, although Miller is indirectly showing Beatrice and Eddie are not able to have sexual relationship between them, it could be argued that this could be because of the fact that Beatrice is can see that Eddie has a sense of over protectiveness for Catherine and therefore because of this they are unable to consummate their marriage. This could infer that Beatrice is not a tragic victim as she is able to see the strangeness in her husband yet she is not taking any action therefore Miller could be demonstrating that it is Beatrice?s own fault that she is losing out on her marriage. On the other hand, although Miller portrays Beatrice as a character that shows faithfulness and loyalty, she loses out on the most at the end of the drama. ...read more.

The social status of Eddie is a constant issue and factor in Beatrice being perceived as a tragic victim. Eddie is seen as the dominant male in the play and therefore according to social norms Beatrice and Catherine are made to abide what he says because of them being women. Nevertheless, throughout the play, Beatrice is the first one to express the affection that Eddie has for Catherine however despite knowing Eddie?s feelings for Catherine she does nothing to stop him and only gets the courage to say something to him at the end of the play. Also, the audience is able to interpret that there is not actually a sexual relationship between Eddie and Beatrice, this may suggest that because Beatrice does not give any of her time to Eddie as a husband he may feel neglected and therefore tries to fulfil his sexual desire through Catherine. The audience can distinguish that Beatrice has feelings for Eddie from the way that she talks about how she loves him. However throughout the play the audience do not observe Beatrice expressing her love physically which may be what leads the character of Eddie to move onto Catherine. Nevertheless, Beatrice is a tragic victim as even after everything that has happened Eddie dies in Beatrice?s arms and it is Beatrice?s character that loses out on the most at the end of the play. ...read more.