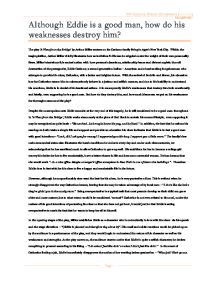 A View from the Bridge. Although Eddie is a good man, how do his weaknesses destroy him?

Although Eddie is a good man, how do his weaknesses destroy him? The play 'A View from the Bridge' by Arthur Miller centres on the Carbone family living in 1950's New York City. Within the tragic plotline, Arthur Miller vividly illustrates how an individual's life can be crippled under the weight of their own personality flaws. Miller intertwines this central notion with how personal obsessions, relationship issues and distrust explain the self destruction of the protagonist, Eddie Carbone; a second generation Italian - American and a hardworking longshoreman who attempts to provide his niece, Catherine, with a better and brighter future. With the arrival of Rodolfo and Marco, his obsessive love for Catherine causes him to subconsciously behave in a jealous and selfish manner, and due to his inability to understand his emotions, Eddie is in denial of his irrational actions. It is consequently Eddie's weaknesses that destroy him both emotionally and fatally, even supposing he is a good man. But how do they destroy him, and how much blame can we put on his weaknesses for the tragic outcome of the play? Despite the unscrupulous acts Eddie commits at the very end of this tragedy, he is still considered to be a good man throughout. In 'A View from the Bridge', Eddie works strenuously at the piers of Red Hook to sustain his current lifestyle, even supposing it may be recognised as quite basic - "He worked...he brought home his pay, and he lived." In addition, the fact that he rations his earnings to both retain a simple life and support and provide an education his niece indicates that Eddie is in fact a good man with good intentions - "Look, did I ask you for money? ...read more.

Due to the fact that Rodolfo exhibits more desirable qualities than Eddie, Eddie is even more resentful that her niece is falling for a younger and more attractive man. Immersed in the emotions of protectiveness and envy and desperate to have Catherine to himself, Eddie attempts to diminish Catherine's interest in Rodolfo, claiming that he wants to marry her only to obtain his American citizenship- "He marries you he's got the right to be an American citizen". However, it is evident that such behaviour is out of pure jealously, and it is clear when he speaks to Alfieri that he is also confused about his feelings and does not know for sure why he is blaming Rodolfo, or perhaps he is denying the truth that he loves Catherine. First he says "I mean he looked so sweet there, like an angel - you could kiss him he was so sweet" indicating that he despises him because of his h********l mannerisms, but later he contradicts himself saying "...and when I think of that guy layin' his hands on her I could - I mean it's eatin' me out", indicating that he believes Rodolfo is getting far too close to his niece and should back off. This contradiction could be because of his failure to mask the feelings he has for Catherine or the confusion Eddie feels because of not seeing the difference between his thoughts and what he wants others to believe. Additionally, Eddie simply refuses to allow Catherine to love Rodolfo; his airy accusations of Rodolfo are also based on his inability to trust others, which is also highlighted in his conversation with Catherine when he allows her to take the job as a stenographer - "I only ask you one thing - don't trust nobody." ...read more.

Despite all that happens in the play, another side of Eddie is suddenly shown just before his tragic death - "(Eddie) Then why-Oh, B.! (Beatrice) Yes, yes! (Eddie) My B.!" As Eddie lies dying in Beatrice's arms, the couple find some sort of reconciliation and repair of their torn and battered relationship. Beatrice, even under such horrifying circumstances, is able to forgive Eddie and regardless of him constantly dominating Beatrice throughout the play, in this tiny moment Eddie needs Beatrice more than she needs him. It is the first time the audience hears that Eddie cannot only rely on himself and it is the first time that he honestly needs Beatrice by his side. The last words of Eddie Carbone show the audience that Eddie was not a bad person - he was simply human and let his self-destructive weaknesses seal his own fate and lead up to his own death. In conclusion, Arthur Miller presents the slightly atypical protagonist Eddie Carbone as an undoubtedly good man with many self-destructive weaknesses. Although Eddie supports and wishes for the best for Catherine, his obsessive love for her fuels his mad desire to have her all to himself. The arrival of Rodolfo and Marco provides a catalyst in the self-destruction of Eddie Carbone as he becomes jealous and suspicious of Rodolfo, failing to control his emotions as he fails to understand his own feelings and actions. As his egocentricity and jealousy grows, his weaknesses cause his life to spiral out of control and in due course, he is prepared to lose everything taking the final, fatal blow inflicted by his own hand. Symbolically, Eddie Carbone, the good and hard-working man, is destroyed by his own weaknesses. ?? ?? ?? ?? 20th Century Drama Coursework [First Draft] Arta Ajeti 11B.2 Page 1 ...read more.