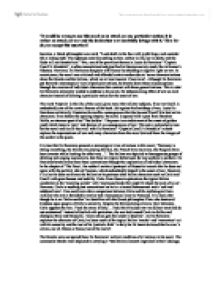 'It would be wrong to see this novel as an attack on any particular nation; it is rather an attack on war and the barbarism war inevitably brings with it.' How far do you accept this assertion? Socrates, a Greek philosopher once said, "Look death in the face with joyful hope, and consider this a lasting truth. The righteous man has nothing to fear, neither in life, nor in death, and the Gods will not forsake him." War, one of the prevalent themes in Louis de Bernieres' "Captain Corelli's Mandolin", is often romanticised and glorified in Grecian society much like in Homer's Odyssey. However, De Bernieres disagrees with Homer by shedding a negative light on war. In recent years, the novel was criticised and offended certain readers due to 'some characterizations about the Greeks and the Italians, which are at least insolent if not racist'. Although De Bernieres put forward a stereotypical view of particular nations, he breaks down these misconceptions through the creation of individual characters that contrast with these generalizations. This is what De Bernieres ultimately wished to address in his novel; the dehumanizing effect of war on each character instead of blaming a particular nation for the onset of war. The word 'Captain' in the title of the novel gives away that military subjects, if not war itself, is undoubtedly one of the central themes of the book. Set against the backdrop of war, Louis De Berni�res realistically illustrates the terrible consequences that the Second World War had on his characters. Even before the opening chapter, the novel is opened with a poet from Humbert Wolfe, an interwar poet titled 'The Soldier'. The poem is an indictment of the waste of golden youth which turns to 'grey' and demise all as consequences of war. ...read more.

Mandras, much like Odysseus from Homer's Odyssey had very high expectations of military life and believed 'no man is a man until he has been a soldier'. However, when Mandras returned after the war he was beyond recognition. De Bernieres uses horrid images and graphic description of Mandras' post-war physique as 'caked with old, congealed blood' and 'reek of rotting flesh'. The author goes out of his way to ensure his readers can imagine the true result of war on a man through Mandras' transformation who was previously compared to Adonis, a Greek god that alludes youth and attractiveness, into a monster. Before he went to war, through Pelagia's narrative, she was 'transfixed by his [Mandras] beauty' which highlights that their love was of physical nature and nothing more. De Bernieres deliberately put a stark contrast of Mandras' physical being before and after the war to demonstrate to his reader the severe repercussions of war in the physical sense. What Mandras had to endure physically manifests itself mentally. Mandras, initially depicted as the archetypical Greek male who is loveable and innocent, has suddenly turned into an insufferable and violent character upon his dramatic return from fighting. Through the chapter of 'Mandras behind the veil' De Bernieres takes a post modernist approach and used a first person narrative to describe the hardship of war. A personal account maintains a certain degree of realism and only puts forth powerful images. Mandras recollects his journey back to Pelagia and reflects on the hardship he endured. This brings back to Homer's Odyssey where his protagonist Odysseus had suffered through periods of madness during his voyage back home to his wife after his revival in Ithaca only to find himself in the shedding of blood of hundreds of suitors. ...read more.

Progressively into the 'L'Omosessuale' chapters, we can see him talk about war in a negative light. Carlo also talks about how nature intervened in the midst of battle "...until the weather turned against us." And "Francesco and I were saved by the weather." This interference from fate shows that war is arbitrary as much as it is unnatural. He knows that the real tragedy of war is death, "War is wonderful until someone is killed" and realises that "War is a wonderful thing, in movies and in books". Here De Bernieres is putting forward the idea that this idealised version of war is fictitious and can only be seen in movie and in books. The same can be said about Mandras. His reason for going to war was to prove to Pelagia and villagers of Cephallonia that he is a hero like Odysseus. However, war did not elevate him but rather brought out the monster in him. Driven by his extreme political beliefs, Mandras returns as a violent and sadistic character. By contrasting powerfully the preconceived notions and the true nature of war, De Bernieres highlights that the typical view of war which is glorified and romanticized by films and literature, even in Greek mythology, cannot be far remove from the actual truth. To see 'Captain Corelli's Mandolin' as a novel that attacks on other nation and to overlook the devastating effects of war and occupation to the inhabitants of Cephallonia is simply sacrilegious and an insult to De Bernieres' work. He explores the human emotions and characterization in the presence of war. While some prevail and some falter under war circumstances, De Bernieres very much condemns the barbarism of war as summarised by Francesco eloquently, "I came into this war in a state of innocence and I leave it so utterly wearied that I am contented to die. ...read more.