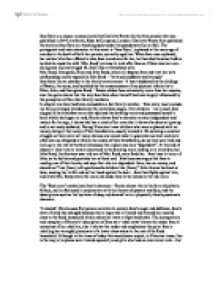 Jane Eyre is a classic romance novel by Charlotte Bronte (in the first person) that was published in 1847; by Smith, Elder & Company, London. Charlotte Bronte first published the book as Jane Eyre: an Autobiography under the pseudonym Currer Bell. The protagonist and main character in this novel is 'Jane Eyre'; orphaned at the mere age of one due to the death of both her parents, currently aged ten. When Jane was orphaned, her mother's brother offered to take Jane in and care for her, he then died however before he died he made his wife 'Mrs. Reed' promise to look after Jane as if Jane was her own - she agreed. Currently aged 10, Jane lives at Gateshead with: Mrs. Reed, Georgiana, Eliza and John Reed; whom all despise Jane and treat her with confounding cruelty especially John Reed - 'he struck suddenly and strongly' Jane feels like an outsider to her family environment `A heart saddened by the chidings of Bessie, the nurse, and humbled by the consciousness of my physical inferiority to Eliza, John, and Georgiana Reed. ...read more.

Jane then fights against him, and when Mrs. Reed enters the room she sends Jane to be locked in the red-room. The "Red room" symbolizes Jane's character - Bronte shows this in the form of pathetic fallacy; red is often used in conjunction with the themes of passion and fury, and the descriptions such as the 'curtains of deep red damask' mirror physically Jane's passionate character. 'I resisted'. Bronte uses first person narrative to convey Jane's anger and defiance; Jane's state of mind has changed because she is angry she is treated and viewed as a second class to the Reed household which makes her want to fight back/rebel. The juxtaposition and metaphor of Bronte's' description of Jane as a 'rebel slave' shows the reader Jane is conscious of her rebellion, also it shows the reader and emphasizes the point Jane is rebelling her wrongful placement of a lower-class status to the rest of the Reed household. Although in the times of today this would seem unjust, in Victorian times, this is the way all orphans were treated especially and girls who had an even lower rank - ...read more.

Bronte's use of other similes such as; `half fairy` `half imp` implies the room had stimulated Jane's imagination furthermore the mirror may symbolizes Jane's inner self. During Victorian times they genuinely believed in super superstitions; during mourning a death mirrors were covered because of a lingering superstition that the spirit of the deceased could become trapped in the reflective glass - ` Superstition was with me at that moment`. The metaphor `revolted slave` shows the reader Jane still feels to rebel despite her fears, also again Bronte refers to the theme of slavery, which shows yet again Jane feels trapped - she has no freedom, Jane does not want to be in the red room but has no choice. This was the case during Victorian times; orphans had no choice, no say in the matter, orphans had no free will. Jane's education and knowledge provided her with a basis to understand her situation, and act impulsively which results in a revolt - a rebellion. Jane feels isolated; because she's in so much shock she must think deeply, and gather her thoughts. `I was like nobody there` ...read more.