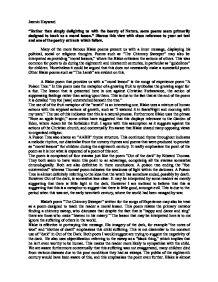 Many of the more famous Blake poems present us with a inner message, displaying his political, social or religious thoughts. Poems such as The Chimney Sweeper may also be interpreted as providing moral lessons,

Jasmin Hayward "Rather than simply delighting us with the beauty of Nature, some poems seem primarily designed to teach us a moral lesson." Discuss this view with close reference to your set text and one of the poetry extracts which follow. Many of the more famous Blake poems present us with a inner message, displaying his political, social or religious thoughts. Poems such as "The Chimney Sweeper" may also be interpreted as providing "moral lessons," where the Blake criticises the actions of others. This was common for poets to do during the eighteenth and nineteenth centuries, in particular as "guidelines" for children. Nonetheless it could be argued that this does not necessarily make a successful poem. Other Blake poems such as "The Lamb" are evident on this. A Blake poem that provides us with a "moral lesson" is the songs of experience poem "A Poison Tree." In this poem uses the metaphor of a growing fruit to symbolise the growing anger for a foe. ...read more.

However Out of the dark, is somewhat less clear. It may be interpreted by some readers as merely suggesting that there is little light in the dark. However I am inclined to believe that this is suggesting that this is a metaphor to suggest that there is little good, amongst evil. This is due to the period when this was set, the early twentieth century, where the world had been ravaged by war. Blake's poem "The Chimney Sweeper" written for the songs of Experience may also be treat as a poem designed to teach the reader a moral lesson. This poem relates the primary narrator finding a chimney sweep, who discusses that despite the fact that is "happy and dance and sing" there are those who make "heaven in his misery." The lesson that may be interpreted here is to not ignore the suffering of others in the world. Blake is effective in portraying this message. His imagery of the dark, for example "the notes of woe" and "clothes of death" emphasises this child suffering. ...read more.

As although they portray different meanings, they both make an impact. The Blake final line is a famous one. Its suggests Blake's hatred for a hierarchical society, which we know he had against the church and the king. However some suggest that it is not merely the hierarchical figures that "make a heaven" of their "misery," but those who obey them. This has some validity, as it wasn't merely those who were ignorant to their suffering, and they made little to do anything about it also. Furthermore this emphasises the idea that this is a poem designed to teach a moral lesson, as it is centred around everyone and not merely the hierarchical society. Nonetheless I would argue that not all successful poetry was designed to provide us with a lesson on our morals. Some are merely simplistic in delighting in nature. Such a perfect example in "The Lamb" by William Blake. In a contrast to the Thomas poem "the lamb" centres of the "bright" and the "delight" rather than the dark. The reason for this emphasises Blake's own delight in this. ...read more.