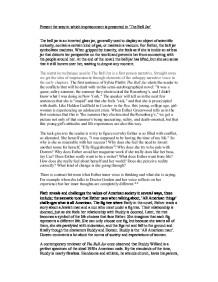 Present the way in which imprisonment is presented in 'The Bell Jar' The bell jar is an inverted glass jar, generally used to display an object of scientific curiosity

Present the way in which imprisonment is presented in 'The Bell Jar' The bell jar is an inverted glass jar, generally used to display an object of scientific curiosity, contain a certain kind of gas, or maintain a vacuum. For Esther, the bell jar symbolizes madness. When gripped by insanity, she feels as if she is inside an airless jar that distorts her perspective on the world and prevents her from connecting with the people around her. At the end of the novel, the bell jar has lifted, but she can sense that it still hovers over her, waiting to drop at any moment. The narrative technique used in The Bell Jar is a first person narrative. Straight away we get the idea of imprisonment through elements of the unhappy narrative voice in the early chapters. The first sentence of Sylvia Plath's The Bell Jar alerts the reader to the conflicts that will be dealt with in this semi-autobiographical novel: "It was a queer, sultry summer, the summer they electrocuted the Rosenberg's, and I didn't know what I was doing in New York." The speaker will tell us in the next few sentences that she is "stupid" and that she feels "sick," and that she is preoccupied with death. Like Holden Caulfield in Catcher in the Rye, this young, college age, girl-woman is experiencing an adolescent crisis. When Esther Greenwood tells us in the first sentence that this is "the summer they electrocuted the Rosenberg's," we get a picture not only of that summer's being nauseating, sultry, and death-oriented, but that this young girl's attitudes and life experiences are also this way. ...read more.

In some ways, Buddy and Esther endure similar experiences. They both show great promise at the beginning of the novel, and at the novel's end have become muted and worldly. Buddy's time in the sanatorium during his bout with tuberculosis parallels Esther's time in the mental institution. Both experiment with premarital sex. Still, they share few character traits, and Esther must reject Buddy because she rejects his way of life. She will not become a submissive wife and mother and shelve her artistic ambitions. I think Esther's relationship with Buddy echoes the power of men in the 1950's. She is trapped by the over-powering force of men. Esther's sense of alienation from the world around her I think, comes from the expectations placed upon her as a young woman living in 1950s America. Esther feels pulled between her desire to write and the pressure she feels to settle down and start a family. While Esther's intellectual talents earn her prizes, scholarships, and respect, many people assume that she most wants to become a wife and mother. The girls at her college mock her studiousness and only show her respect when she begins dating a handsome and well-liked boy. Her relationship with Buddy earns her mother's approval, and everyone expects Esther to marry him. Buddy assumes that Esther will drop her poetic ambitions as soon as she becomes a mother, and Esther also assumes that she cannot be both mother and poet. ...read more.

and Betsy (the "good" girl). The one startling characteristic that Esther has is that she intends to defy any role or life path that will pigeonhole her into being one kind of woman or another. Esther Greenwood wants to be herself, and to be an individual. She wants her American birthright, which is why she keeps saying over and over, "I Am I Am I Am." The language, form and structure of the novel is carefully devised I think so we as an audience get an insight into Esther's entrapment. The novel is broken up into a first person narrative and the presentation of characters helps us have a wider understanding of the novel. For example Plath uses characters such as buddy Willard, using a clever writing technique to show his relationship with others, how people viewed him, his actions and physical description. Through Buddy we can have a better understanding of Esther's situation. Plath uses the technique of flashback for suspense and to delay the plot. A lot of similes and metaphors are used to contribute to imprisonment. For example similes reflecting the 1950's 'yellow as cinnamon'. Overall, I think that Plath is trying to convey the idea that women were being placed in a constricted role in society live as if in a bell jar, able to see the outside world of exciting work and self-determined men, but unable to live it. People suffering from emotional illness are also living as if under a bell jar, isolated from others and unable to escape the distortions of their view of the world. ...read more.

The writer has gathered a good deal of interesting and potentially relevant material, but has missed many opportunities to present the material in a way which is firmly linked to the question.
***