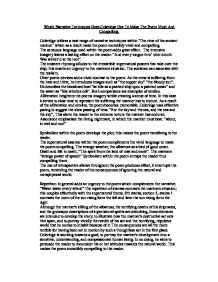 Which Narrative Techniques Does Coleridge Use To Make The Poem Vivid And Compelling?

Which Narrative Techniques Does Coleridge Use To Make The Poem Vivid And Compelling. Coleridge utilizes a vast range of narrative techniques within 'The rime of the ancient mariner' which as a result make the poem incredibly vivid and compelling. The sensuous language used within the poem adds great effect. The intensive imagery leaves a lasting effect on the reader. "And every tongue thro' utter drouth Was wither'd at the root". The insistent rhyming alludes to the irresistible supernatural powers that take over the ship; this inserts an urgency to the mariners situation. The audience can associate with the realism. Other poetic devices add a vivid contrast to the poem. As the crew is suffering from the heat and thirst, he introduces images such as "the copper sky" "the bloody sun". He describes the becalmed boat "as idle as a painted ship upon a painted ocean" and the water as "like witches oils". Both comparisons are examples of similes. Alliteration heightens the poems imagery whilst creating a sense of time. In this case it serves to slow time to represent the suffering the mariner has to endure. As a result of the alliteration and similes, the poem becomes memorable. ...read more.

This makes the poem incredibly compelling to the reader. Storytelling within the poem is a preventative measure, used to dissuade those who favour the pleasures of society (like the wedding guest and arguably the reader) from disregarding the metaphysical and natural world. The poem could be seen as an allegory for the writer's task. Coleridge uses the word "teach" to describe the mariner's storytelling technique, and says he has the strange power of speech". In this way Coleridge compares the protagonist to himself. Both are gifted story tellers who impart their wisdom to others. Like the mariner who is forced to live a horrifying limbo between the living and dead, the writer is condemned to balance in the liminal space of imagination. Taking this into account serves to make the poem more vivid, the reader is compelled to read and feel a part of the poem. By associating himself with the Ancient Mariner, Coleridge implies that he, and by extension all writers, are not only inspired but compelled to write. The significance of this within relation to the context of the poem draws the reader within; captivating them as a result. ...read more.

The first is that retribution is blind; inspired by anger and the desire to punish others, even a spirit may hurt the wrong people. The second is that the sailors are implicated in the Ancient Mariner's crime. If the Ancient Mariner represents the universal sinner, then each sailor, as a human, is guilty of having at some point disrespected one of God's creatures-or if not, he would have in the future. But the eternal punishment called Life-in-Death is reserved for the Ancient Mariner. Presumably the spirit, being immortal, must endure eternal grief over the murder of its beloved Albatross. In retribution, it forces the Ancient Mariner to endure eternal torment as well, in the form of his curse. Though he never dies - and may never, in a sense - the Ancient Mariner speaks from beyond the grave to warn others about the harsh, permanent consequences of momentary foolishness, selfishness, and disrespect of the natural world. In conclusion Coleridge uses a vast array of techniques to produce a vivid and compelling ballad. Not only does Coleridge produce a truly vivid poem through effective narrative, he explores the art of story telling it's self. In effect this compels the reader further, the audience is drawn within the poem it's self. ...read more.