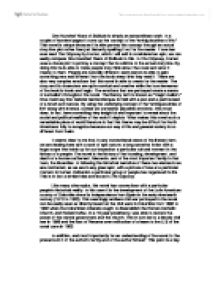 One Hundred Years of Solitude is simply an extraordinary work. In a couple of hundred pages it sums up the concept of the "ambiguousities of life." This novel is unique because it is able portray this concept through an actual story line plot rather than just blatantly spelling it out for the reader. If one has ever read The Odyssey by Homer, which I will add is considered an epic, we can easily compare One Hundred Years of Solitude to this. In The Odyssey, Homer uses a clever plot to portray a concept that is sublime to the actual story line. By doing this he is able to make people truly think about the novel and what it means to them. People are naturally different; each person is able to gain something new and different from the book every time they read it. There are also very complex emotions that this novel is able to create for the reader. The story and its characters are quite comical and creative while the true demeanor of the book is ironic and tragic. The emotions that are portrayed create a sense of surrealism throughout the novel. The literary term is known as "magic realism." One could say that Gabriel Garcia Marquez is Dali with a pen and a pad instead of a brush and canvas. By using the underlying concept of the "ambiguousities of life" along with intense, surreal yet somewhat plausible emotions, this novel does, in fact, have something very insightful and important to reveal about the social and political realities of the world it depicts. What makes this novel such a remarkable piece of world literature is that this theme may be difficult for North Americans fully to recognize because our way of life and general society is so different from theirs. It seems clear to me that, in any conventional sense of the literary term, we are dealing here with a work of epic nature: a long narrative fiction with a huge scope that holds up for our inspection a particular cultural moment in the history of a people. ...read more.

However we interpret the story, we need to take those aspects fully into account, and not minimize their impact in order to enjoy the comic inventiveness and the fantasy without any serious ironic qualifications. Exploring this dual response further, I would like to point to one very marked feature of the novel, the working throughout of two senses of time, linear and circular. The interplay between these two senses creates some of the novel's most important effects. In the first place, we see that there is a strong sense of a linear development to the history of the town of Macondo. We follow the story from its founding, through various stages up to a flourishing modern town, then to its decline and eventual annihilation. In general, the linear history of the town falls into four sections. First, there is innocence and social harmony, in which Macondo exists like an early Eden, its inhabitants so pure that no one has yet died and they don't even have names for things, the world "was so recent that many things lacked names, and in order to indicate them it was necessary to point." (p. 11) This section takes up the first five chapters of the book. The story then moves on to the military struggle in the various civil wars and revolutions (Chapters 6 to 9), then into a period of economic prosperity and spiritual decline (Chapters 10 to 15), and finally to decadence and physical destruction (Chapters 16 to 20). The narrative is given to us, for the most part, following this linear sense of time, so that we always know roughly where we are in this story. We know because of the nature of the various "invasions" which occur. Usually outsiders arrive bringing the latest in technology or bureaucracy: gypsies, government officials, priests, various military forces, the lawyers, the railway, the American capitalists, the European with the bicycle and the passion for airplanes, and so on. ...read more.

This book, produced by a writer and magician may restore historical memory, the strike and the war will be remembered, as will be the futile fantasies of a civilization which could not incorporate those into its political and historical realities. It may be significant that, although we learn little about Gabriel Marquez in the novel, we do know that he escapes Macondo with the complete "works of Rabelais" (p 409). The mention here of one of the supremely comic geniuses of world literature may be an important reminder of what the main function of this novel is: to celebrate the "tragi-comic" history of Macondo in a way that people can learn from it. If one of the great imaginative purposes of the best comedies, like The Odyssey, is, to celebrate the ability of human beings not only to survive but also to prevail, then the comic purposes of One Hundred Years of Solitude may well be to make sure that the full educational influences of comedy are delivered to the people. When we discussed The Odyssey, we talked about how such a process of transformation is one of the major points of the epic, so that Odysseus is not the same person he was when he first departed from Troy. He has become aware of a new and transforming set of values. Such a development, one might argue, is something the Buendias cannot undergo, and their fate may well be linked to this failure of their comic imaginations. At any rate, the "self-referencing" quality of the ending of the novel, when it, in effect, writes its own conclusion and points to a world beyond Macondo from which the author, Marquez, is telling the story. It offers a final insight that whatever life is to be lived in Latin America it is not to be the magic but ultimately self-defeating experience of the Buendias and Macondo. The novel is revolutionary, nd an amazing piece of literary work. World Literature Paper: One Hundred Years of Solitude Zach Levine IB English Period 5 June 16th, 2003 ...read more.