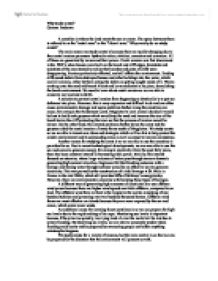 A coastline is where the land meets the sea or ocean. The space between them is referred to as the costal zone or the littoral zone. Why exactly do we study coasts?

A coastline is where the land meets the sea or ocean. The space between them is referred to as the "costal zone" or the "littoral zone." Why exactly do we study coasts? The main reason we study coasts is because they are rapidly changing due to four costal erosion processes: hydraulic action, attrition, corrosion and corrasion. All of these are generated by waves and their power. Costal erosion was first discovered in the 1930's when houses were built on the beach and cliff edges. Residents and scientists of the area started to realise that beaches and parts of cliffs were disappearing. Erosion particularly affected, and still effects the environment. ...read more.

On the other hand, this created problems further down the coast and the groynes aided the costal erosion of many farms south of Mappleton. We study coasts so we are able to invent new ideas and strategies which will be able to help protect the coastal environment and its surrounding areas as well as conserve marine ecosystems. Another reason for studying the coast is so we are able to use the resources it provides for us. Due to recent technological developments, we are now able to use the sea and ocean to generate energy, for example electricity. Over the past forty years, there has been constant interest in harnessing tidal power. ...read more.

Offshore wind farms are most effective on islands because they are more exposed by the sea and ocean, which create more winds. An additional cause for learning about coastlines is so we can prepare for high sea levels due to the rapid melting of ice caps. Monitoring sea levels is important because if they rise too quickly, low-lying land all over the world will be lost due to severe flooding. By observing sea levels, we are able to accurately predict when flooding could occur and be prepared by evacuating people out before anything catastrophic happens. We study coasts for a variety of reasons, but the main motive is so that we can be prepared for the disasters that the environment will present us with. ?? ?? ?? ?? Why study coasts? Gemma Andrews ...read more.