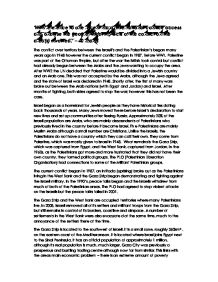 With reference to one recent major international conflict, access and analyse the geographical impacts of the conflict on the area(s) involved. Israel and Palestine.

'With reference to one recent major international conflict, access and analyse the geographical impacts of the conflict on the area(s) involved.' - 40 marks The conflict over territory between the Israeli's and the Palestinian's began many years ago in 1948 however the current conflict began in 1987. Before WW1, Palestine was part of the Ottoman Empire, but after the war the British took control but conflict had already begun between the Arabs and the Jews wanting to occupy the area. After WW2 the UN decided that Palestine would be divided into a Jewish country and an Arab one. This was not accepted by the Arabs, although the Jews agreed and the state of Israel was declared in 1948. Shortly after, the first of many wars broke out between the Arab nations (with Egypt and Jordan) and Israel. After months of fighting, both sides agreed to stop the war; however this has not been the case. Israel began as a homeland for Jewish people as they have historical ties dating back thousands of years. Many Jews moved there before Israel's declaration to start new lives and set up communities after fleeing Russia. ...read more.

It is located where Israel joins Egypt next to the Sinai Peninsula. It has an official population of approximately 1 million, although its real population is much, much larger. Gaza City was previously a prosperous and bustling trading centre although now far from similar. This links with the areas main economic problem - there is an extreme amount of poverty amongst the large number of Palestinian refugees living in the Gaza Strip. There are many impacts of this conflict on the area and in particular those living there. The social, environmental and economic impacts are all interlinked. The Gaza Strip is severely hampered by its extremely high population density. At 3400/km� it is one of the highest in world which has both social and environmental impacts. This also links economically as it has lead to the economy of the Gaza Strip being laden by its limited land access purely because it is already a very small area with a very high population density. Land is at a premium in the Gaza Strip. ...read more.

45% of the land is used for agricultural purposes - mainly citrus and other tree products. There are also a number of seasonal crops that come from the area. 115sq km is under irrigation. This is in desperate need of a reliable water supply, but this cannot be relied on. And the quality of water cannot be relied on either. Israel locked down the borders to the Gaza Strip, which has serious economic impacts. Trade is virtually impossible out of the Gaza Strip, and it is now made to provide its own resources. However, although Israel removed its settlers and troops from the Gaza Strip, it still has control over the area therefore they continue to control its access to resources. Israel supplies the Gaza Strip with electricity - this is intermittent and not guaranteed by any standards. The lack of fuels available to the Gaza Strip has caused a backward economy as it has completely broken down and it almost completely dead. In 2008, it was reported that 87% of private businesses in the Gaza Strip had closed down - most businesses in the area were small family businesses. Israel continues to give very little support to the area causing a complete breakdown of the area's economy. ...read more.

A good attempt at assessing the impacts of conflict in the Israel/Palestine region. It lacks a conclusion and therefore does not fully answer the question set, however there is an attempt to review the impacts.
3 stars