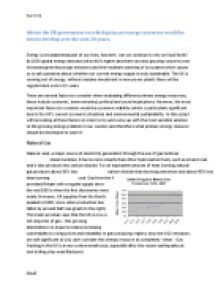 Advise the UK government on which primary energy resources would be best to develop over the next 20 years.

﻿Dan Grist Advise the UK government on which primary energy resources would be best to develop over the next 20 years. Energy is a fundamental part of our lives; however, can we continue to rely on fossil fuels? By 2030 global energy demand will be 40% higher and there are also growing concerns over increased greenhouse gas emissions and the resultant warming of our planet which causes us to ask questions about whether our current energy supply is truly sustainable. The UK is running out of energy, without massive investment in new power plants there will be regular black outs in 10 years. There are several factors to consider when evaluating different primary energy resources; these include economic, environmental, political and social implications. However, the most important factors to consider would be economic viability (which is particularly significant due to the UK?s current economic situation) and environmental sustainability. In this essay I will be looking at these factors in order to try and come up with the most sensible solution to the growing energy problem in our country and therefore what primary energy resource should be developed to solve it. Natural Gas Natural gas is a major source of electricity generation through the use of gas turbines and steam turbines. ...read more.

It is a finite stock resource - many oilfields are depleting; meaning production has peaked and prices will rise (price instability). This has also led to searching for unconventional reserves of oil e.g. in the Arctic. There could be 16 billion barrels of oil in Alaska and big oil TNCs are keen to extract it from this fragile wilderness which causes many harsh environmental impacts. The oil industry has a large dependence on politically unstable regions which causes many problems; the recent Arab spring conflict in Libya meant there were no exports of oil from this major producer. As well as creating a lot of CO2 emissions which contributes to global warming a major environmental implication is oil spills; the deep water horizon oil spill disaster caused extensive damage to marine and wildlife habitats and to the Gulfs fishing and tourism industry. Biofuels Biofuels are crops or organic matter such as agricultural wastes which can be used as fuels. They are defined as renewable because they are based upon plants which have trapped the sun?s energy during photosynthesis and converted it into chemical energy. In the UK it accounts for 0.6% of energy consumption ? there are only a few facilities burning Biofuels such as waste wood products and straw that are already operating. ...read more.

However, much of the UK?s hydropower potential has already been exploited with large scale future development unlikely. I also believe that solar power isn?t the right renewable energy to go for as the UK?s climate is simply not suitable enough for it to have a large impact on our growing energy consumption. Wave and tidal energy does however have large potential in the UK however I am worried that due to its early stage in development it would need massive investment for it to reach its potential; this I believe would not be economically viable in the UK considering our current economic climate. This leaves me with wind power. I believe that this should be the energy resource that should be further developed over the next 20 years for several reasons; it is currently the fastest growing renewable in the UK and there is already heavy government backing to support it. There are little environmental impacts to be considered and with costs falling it is also economically viable. NIMBYISM objections can also be solved with the development of off-shore wind farms further out to sea, for example the world's biggest offshore wind farm off Kent with the 100 turbines being expected to generate enough electricity to power 200,000 homes. The success of this particular development will in my opinion become a catalyst for further development of more wind farms in the UK and will hopefully help solve the growing energy problem in our country. ...read more.