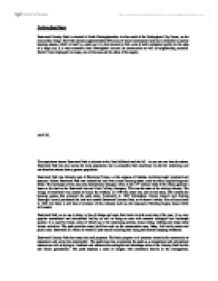 Bestwood Country Park is situated in North Nottinghamshire 4 miles north of the Nottingham City Centre, on the rural-urban fringe.

Introduction Bestwood Country Park is situated in North Nottinghamshire 4 miles north of the Nottingham City Centre, on the rural-urban fringe. The Park contains approximately 650 acres of varied countryside land and is boarded in part by housing estates, which in itself is a rarity as it is very unusual to find a site of such ecological quality on the edge of a large city. It is very accessible form Nottingham city and its communities as well as neighbouring counties. Below I have displayed two maps, one of the area and the other of the region. MAP X2 The map above shows Bestwood Park in relation to the East Midlands and the M1. As you can see from the above, Bestwood Park not only serves the local population, but is accessible from elsewhere via the M1 motorway, and can therefore attract from a greater population. Bestwood Park was formerly part of Sherwood Forest, a wide expanse of habitats including heath woodland and pastures. Before Bestwood Park was created the land was a royal hunting estate, used by many English kings and dukes. The landscape of this area was dramatically changed, when in the 19th century Duke of St Albans granted a lease on his land to the Bestwood Iron and Coal Colliery Company. This was the start of the mining industry. The village of Bestwood was created to house the workers. In 1939 the estate was sold to the army, who created the housing estates that surround the park today. Eventually in 1985 Nottingham County Council and Gedling Borough Council purchased the land and created Bestwood Country Park, as we know it today. The colliery closed in 1967, but there is still lots of evidence of this industry such as; the impressive Winding Engine house which still stands. Bestwood Park, as we see it today, is free of charge and open from dawn to dusk every day of the year. ...read more.

Much of the parks historical background would probably be forgotten is the proposal was to succeed. Below I have shown a picture of Bestwood Lodge which has a great historical significance. In building a theme park, the developers will be looking for every opportunity to make money. Therefore, it would be likely that they would use this historical building as en exploit for making money and it would probably loose its significance and historical interest. The industrial heritage due to mining would probably also be lost, which would affect many locals who identify their past with mining on the site of the park. It would be likely that over time the importance of the industrial heritage would be exploited commercially as part of a theme park. It is essential that our heritage is maintained and preserved, which can only be ensured by remaining under the control of the local authority. A problem which may arise if the theme park was to be built would be that of the past industry of the park. This past means that there could be many possible problems which could arise, due to unsuitable land. Areas such as the old spoil heap could cause problems, as there is poor drainage. Building work could disrupt this to an extent which may cause a big problem. The visual side to the proposal is also factor that would be changed if the proposal was successful. These rides will most undoubtedly be built out of brightly coloured materials. Some of the proposed rides may have a summit which rises above the dominant woodland which stands today. This would possibly mean that they would become intrusive and regarded as 'an eye sore', the park would loose its reputation as being a 'visual amenity' which it is at present. The local residents would no longer have a visible natural environment next to them, but an eyesore invading the skyline. ...read more.

The developers of the proposed theme park are not conservationists. Although in theory it sounds plausible and well intentioned to retain an area of the original 'Bentwood Park' so that it remains very much as it does today, in practice this could not happen. The eco-balance would change irrevocably as soon as developers move in. Species would move away, birds would not return and the complex balance of food webs would be upset and a downward spiral would occur. There would be no upturn when the developers left and building work ceased, there is no guarantee that the birds and other species would return. Therefore although it might appear a short-term disruption in terms of the construction of the park the long-term impact for nature would be immense. Indeed I have to say that from looking at the evidence from other theme parks the disruption caused from building new rides is a continual process, with additional features rides and thrills built during the winter season most years in order to maintain visitor numbers and attract new customers. This is an element that is not necessarily visible to most of the public but very important for the future. Whoever was to make the final decision about whether the proposal was to go ahead, would have to consider many of the factors that I have put forward in this report. However, the main problem concerning these decision makers will probably be to weigh up whether a boost in the economy is more valuable than the environment and what's held within it, and to decide whether the park would be feasible. I have stated my opinion, but although I have tried not be biased, it probably will be. Whichever option is chosen will be welcomed by some and disapproved by others, but overall the decision makers have to decide on the outcome which would be the most beneficial in the long term as well as the short term. ...read more.