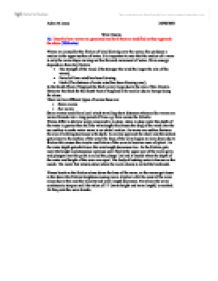 Wave Essays A): Describe how waves are generated and how they are modified as they approach the shore (20Marks) Waves are caused by the friction of wind blowing over the water, this produces a motion in the upper surface of water. It is important to note that the motion of a wave is only the wave shape moving not the forward movement of water. Wave energy depends on three key factors: * The strength of the wind, (The stronger the wind the larger the size of the waves). * Period of time wind has been blowing. * Fetch (The distance of water wind has been blowing over). In the South-West of England the fetch is very large due to the size of the Atlantic. However the fetch for the South-East of England is far smaller due to Europe being far closer. There are two different types of waves these are: * Storm waves * Sea waves Storm waves result from local winds travelling short distances whereas Sea waves are waves formed over a long period of time e.g. ...read more.

The body of rushing water is known as the swash. The water that returns down when the wave returns is called the backwash. Waves break as the friction slows down the base of the wave, as the waves get closer to the shore this friction heightens causing more elliptical orbit the crest of the wave raises due to this and the velocity and wave length decreases. From here the wave continues to steepen until the ration of 1:7 (wave height and wave length) is reached. At this point the wave breaks. B: Explain how and why beach profiles vary from one place to another (25Marks) Beach profiles vary from one place to another due to more then one factor. The first factor is the type of wave that is hitting the beach. There are two types of waves Constructive and Destructive waves. Constructive waves: These are also known as surging or spilling breakers, they tend to result from swell waves (distant storms). These types of waves are usually relatively gentle and move material up the beach. ...read more.

Shingle beaches have a steeper gradient then their sandy counterparts due to the differences in percolation rates. Water will pass through coarse-grained shingle more rapidly then fine grain sand. Usually the larger the size of the shingle the steeper the gradient of the beach. This is due to most of the energy being lost in the swash as the shingle takes it all away due to there being more friction meaning there is not any energy for the backwash to pull material back down. However due to the strong swash berms will be produced. Usually on shingle beaches where a berm has formed there will also be a storm beach consisting of large boulders and alike that have been thrown their by the biggest waves usually during a spring tide. For a sandy beach the profile will be different, this is due to the small particle size of sand alowwing it to become very compact when wet. This restricts the rate of percolation and causes these types of beaches to usually be gentle. ?? ?? ?? ?? Adam M Jones 20/09/2007 ...read more.