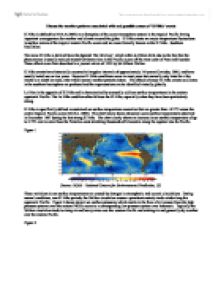 Discuss the weather patterns associated with and possible causes of 'El Ni�o' events El Ni�o is defined by NOAA (2005) as a disruption of the ocean-atmosphere system in the tropical Pacific having important consequences for weather and climate around the globe. El Ni�o events are major temperature fluctuations in surface waters of the tropical eastern Pacific ocean and are more formally known as the El Ni�o - Southern Oscillation. The name El Ni�o is derived from the Spanish 'the little boy', which refers to Christ child, due to the fact that the phenomenon is usually noticed around Christmas time in the Pacific ocean off the west coast of Peru and Ecuador. These effects were first described in a journal article of 1923 by Sir Gilbert Walker. El Ni�o events have historically occurred at irregular intervals of approximately 3-8 years (Caviedes, 2001) and have usually lasted one or two years. However El Ni�o conditions occur in most years but normally only lasts for a few weeks to a month or more, after which normal weather patterns return. The effects of major El Ni�o events on climate in the southern hemisphere are profound and the repercussions can be identified virtually globally. La Nina is the opposite of El Ni�o and is characterized by unusually cold sea surface temperatures in the eastern equatorial Pacific. The La Ni�a condition often follows the El Ni�o, especially when they have been particularly strong. ...read more.

* Hot air rises in western Pacific, travels eastward and cool air descends on South America. * Sea surface is warm in central and eastern Pacific. * Less cold water is pulled up along west coast of South America. * Hot air rises in central Pacific, travels east and west before cooling and descending. * Similar to ENSO normal state. * Warm water accumulates in far western Pacific. * Equatorial water is cooler than in the normal state Source: http://www.pmel.noaa.gov/tao/proj_over/diagrams/index.html The Walker circulation is the main factor in maintaining non El Ni�o conditions and when this circulation weakens a number of different effects are found. If the pressure gradient of the Pacific ocean weakens or reverses then the easterly trade winds also weaken or transpose into westerly winds. This allows the warm water which has built up and been maintained in the western Pacific to equalise across the ocean. If the easterly trade winds weaken sufficiently or reversed then a surge known as a Kelvin wave (Ahrens, 1999) can form. This wave which can stretch for hundreds of kilometres north and south of the equator can return vast quantities of warm water to the Peruvian coast. If the prevailing trade winds weaken for long enough then the pool of warm water normally found around Indonesia will collect along the equator off the Peruvian coast as seen in the classic sea surface temperature chart in figure 1. ...read more.

on the equator and upwelling to the north and south which creates Kelvin and Rossby wave - the theory looks at the reflections of these waves as delayed triggers to El Ni�o. * Recharge/Discharge Theory - this theory is based on the warm pool of the western pacific and proposes that where heat energy builds up then has to be dispersed to higher latitudes by an El Ni�o event. After the release of energy the area than has to recharge before another event can take place. * Western Pacific Oscillator -. emphasises the effect winds outside of the equatorial zone have on the Walker circulation and how small anomalies could trigger an El Ni�o event. * Advective-Reflective Oscillator - emphasises the importance of regional advections associated with wave reflection at both the western and eastern boundaries * Unified Oscillator - current theory for the triggers of El Ni�o events that incorporates the four theories above and is based upon chaos theory. El Ni�o is a highly complex and multi-factorial climate event of the equatorial Pacific ocean that has far reaching global impacts particularly in terms of disruption to normal climate patterns. These disruption to weather can be hugely damaging in terms of human life and economic cost. While the underlying principles and processes of an El Ni�o event are now well understood in terms of the changes in atmospheric and oceanic systems the mechanism which triggers an El Ni�o event are still not fully understood nor are the impacts of global warming. ...read more.