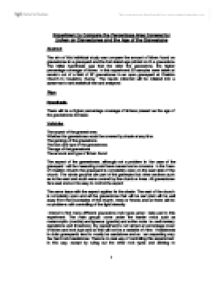 If a gravestone is not tall enough or wide enough then it will have to be removed from the sample and another random gravestone selected. The age of the gravestone is one of the two variables that I intend to measure. This will not be controlled in any way. There is no age limit to the sample and if a gravestone is selected is 200 years old or just 2 years old then it will still be selected and used in my experiment. I will also only note the first date on the gravestone when the first person has been buried to keep the whole experiment constant. The amount of lichen found is the other variable to my experiment. There will be many different types of lichen present on the gravestones but I will not be measuring these as they have no input into my experiment as I am not measuring diversification. However, all lichen that is located in the quadrat during the fieldwork will be measured and not controlled as it is all relevant to my investigation as a collective species. The measurements of percentage coverage will be taken as accurately as possible using the 100, 5cm2 boxes in the 50cm2 whole quadrat. ...read more.

If anything needs to be changed for the real experiment then it can be as the pilot will be a test run and a buffer to see whether the whole experiment can work. Risk Assessment There are no hazardous chemicals involved in this experiment as I am only partaking in a measurement of natural ecology. However consideration must be give to any organisms that I come across and I must not interfere with the course of nature by touching or removing any of the lichens or any other vegetation or animals in the region. Ethical considerations on part of the church must be undertaken and I must ask for full permission from members of the church such as a pastor or reverend, if they are present, to use their graveyard as part of my studies. Also I must be careful not to tread on graves or disrupt any decorations of the graveyard such as flowers. None of the procedures will be dangerous, although suitable footwear such as walking boots would be advisable as there is a slight slope to the graveyard and no footpaths, only grass. Anything that I take into the graveyard shall also be removed such as apparatus or litter. Apparatus * 100cm Ruler (with millimetre markings) * 50cm2 Quadrat * Calculator (with random number generator) * Pencils and Pens for sketching * Paper for sketching the plan map and for data results 1 ...read more.