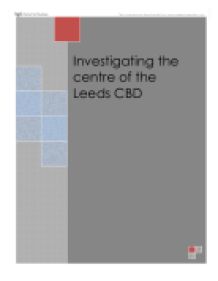 [Year] Geography coursework The aim of my geography project is to find the economic centre of the CBD of Leeds (i.e. the area of highest value in the CBD of Leeds). First of all - what is a CBD? A CBD (central business district) is an area that dominates the commercial and cultural activity in a city. The CBD is normally found in the centre of a settlement where you can find a range of simple shops from cinemas, jewellers, department stores (e.g. Debenhams), offices, public buildings e.t.c, also this is the area of a town/city where businesses like to set up as it is the most accessible part of the settlement. In the beginning, Leeds began as a Saxon village. By the time of the Domesday Book (1086) it had a population of around 200. Then in 1207 the Lord of the Manor, Maurice De Gant, founded a new town in Leeds. At that time trade and commerce were increasing in England and many new towns were being founded The Lord of the Manor created a new street of houses west of the existing village. He divided the land into plots for building. The new street was probably called Bridge Gata (gata is an old word for street). And throughout time the Bridge Gate changed its name to Briggate. In the middle Ages fairs were like markets but they were held only once a year. ...read more.

There are five zones with the CBD as the centre zone of the city. The inner zone is the CBD and this is where the price of land is highest in the city/town and is dominated by commercial and retailing buildings. Then just outside the CBD it's where all the disused factories or buildings are, it is normally known as the brown field site also it is now usually in a state of decline or transition. In Leeds, the area has been redeveloped in some parts e.g. along rive Aire as there are lots of flats and offices replacing the old brown field site. Outside the disused factories and buildings is the old inner city area, where there is low class residential as there are lots of council estates and this is where the factory workers used to live in the early 20th century. Outside the inner city area is the inter-war period and this was when semi-detached housing was built and they normally have gardens with the housing and are normally on large estates. There is also a high concentration of council owned housing and the furthest area from the CBD is the modern suburbs, this is where there is private, high quality housing with large gardens and garages also they can contain a commuter zone which is at the very edge of the city. I think this is in some cases a good model as the zones are in the right places of a CBD but all the zones are not circular. ...read more.

This is a good introduction but prone to waffling at times. It incorporates appropriate models and gives a good overview of the key themes for this project. However, there is some repetition and it is very long for an introduction.
4 stars