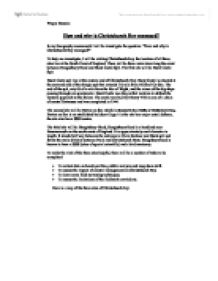 How and Why ChristChurch Bay is Manged

How and why is Christchurch Bay managed? In my Geography coursework I will be investigate the question. "How and why is Christchurch Bay managed?" To help me investigate, I will be visiting Christchurch bay, the location of all three sites lies at the South Coast of England. There will be three main sites along the coast between Hengistbury Head and Hurst Castle Spit. The first site will be Hurst Castle Spit. Hurst Castle spit lies at the eastern end of Christchurch Bay, Hurst Castle is situated at the seaward end of the shingle spit that extends 11/2 mile from Milford-On-Sea. The end of the spit, only 3/4 of a mile from the Isle of Wight, and the views of the big ships passing through are spectacular. Hurst Castle was the perfect location to defend the western approach to the Solent. The castle was built by Henry VIII as one of a chain of coastal fortresses and was completed in 1544. The second site will be Barton on Sea which is situated in the middle of Christchurch Bay, Barton on Sea is an established holiday village it is the site has major costal defence, the site also has a SSSI centre. The third site will be Hengistbury Head; Hengistbury Head is a headland near Bournemouth on the south coast of England. It is approximately one kilometre in length. It stands half way between the entrance to Poole harbour and Hurst spit and forms the main division between Poole and Christchurch Bays. Hengisbury head is known to have a SSSI (sites of special scientific) and a bird sanctuary. To make the visit of the three sites helpful, there will be a number of tasks to be completed * To collect data on beach profiles, pebble analysis and long shore drift. * To assess the impact of coastal management on Christchurch Bay. * To learn some field surveying techniques. ...read more.

This is because human lives are at risk there are two parts to this argument you allow the beached to be Eroded and lost forever or slow down and stop the eroding beaches. This is an image of Barton on Sea The beach and the cliff is being Eroded, sop if human intervene This will have a significant impact There are two options you can stop The eroding beaches and intervenes Or allow nature take its way. This image is from Barton on sea So human intervening plays a big part to what happens to are future beaches so this hypothesis has been proven true.This image of humans who have intervened with Barton on Sea are beaches will end up like this so humans do have a big impact with the future of the beaches. They have intervened by having put huge rock as revetment, to protect the coast In conclusion having intervened will make some impact but not much due to you can not stop the erosion and long shore drift and deposition, all the defences put in place are just slowing nature to take it's place. Sediment on Barton on Sea and Hurst Castle Spit are being Transported by long shore drift Why this hypothesis needs to be answered? First, to be able to answer the question, how is Christchurch bay managed, it is important to have an insight on how attempts to manage it has turned out. Once this is known then it is possible to explain why it needs management, perhaps because the past attempts have had very little success. Questions to help answer this hypothesis: What are the signs of sediment being transported on Hurst Castle Spit and Barton on Sea? Why is sediment transport occurring? Has it had any significant impact? Why do pebbles vary on the spit? If yes why? How can all this relate to the main question? ...read more.

Revetments, which are mainly large boulder, have to some extent sustained the coast, how? This image shows Barton on sea and the revetments and groynes which is circled. Well, unfortunately some parts of Barton on sea were not protected so therefore in result it eroded in the past 20 years, 30m back. This is another concern on why it needs to be protected and how it is protected. Because Christchurch bay is a tourist attraction there is high pressure on authority to improve protection and preserve the cliffs. This image show the part of Barton on sea which was not protected, so it was eroded 30m back. Evaluation This topic was quite good to study, but if I understood it even more in the beginning it would have been even better to study. Most of the aims of this coursework were met but I can't say confidentially that they were not able to a high standard. The methods were appropriate as they were easy to understand. The visited sites was huge advantage for me because it abled to see what the coast had been facing there is a disadvantage but did not collect enough secondary data, which is why I had to do my own research this was an extremely tough and time consuming and the data collected was not accurate enough for me from my point of view . I think I have completed this coursework to an average standard. The study could have been improved by more time and better weather there at the fieldwork, Resources which were used * Museum at Christchurch bay * Primary data recorded at the visit * Web site used: www.soton.ac.uk * Text books for basic theory * Slough Library * Slough & Eton Church of England School Library * GCSE Bitesize Revision (foundation) * Photo's taken on the day ?? ?? ?? ?? Waqas Hussain ...read more.