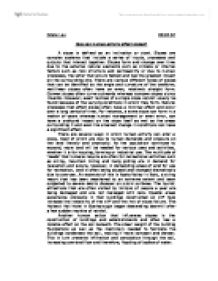 How can human activity affect slopes?

Grace Lau 06.02.04 How can human activity affect slopes? A slope is defined as an inclination or slant. Slopes are complex systems that include a series of inputs, processes and outputs that interact together. Slopes form and change over time due to the external natural elements such as climate or internal factors such as rock structure and permeability or due to human processes, the latter that occurs fastest and has the greatest impact on the surrounding site. There are various different types of slopes that can be identified by the angle and curvature of the landform; rectilinear slopes often have an even, relatively straight form. Convex slopes often curve outwards whereas concave slopes slump inwards. However, exact replicas of a single slope cannot usually be found because of the varying conditions in which they form. Natural processes that affect slopes often have a minimal effect and occur over a long period of time. For instance, a scree slope can form in a matter of years whereas human management or even error, can have a profound impact on the slope itself as well as the areas surrounding it and even the smallest change in conditions can have a significant effect. ...read more.

Grace Lau The vibrations produced from the machinery can also trigger slope movements, however large or small. Also, different forms of constructions such as road cuttings and embankments can create hazardous slopes. The appropriate precautions need to be taken in order to maintain them safely. The action of gravity, precipitation and climate can cause soil creep, even on the seemingly gentlest of slopes, making them unstable. Rotational slip can be occurring, such as in the Isle of Wight where retirement bungalows are thought to be slipping and to cause a landslide eventually. Generally, the land in certain areas are only suitable for particular uses, in farming, slope angles in conjunction with other factors can be crucial for determining the aptitude of the land in question. While steep slopes at low altitudes have a greater potential, there are limits that need to be considered, for instance, the ability for operation of heavy machinery. An example of skilful slope management is the Champagne region in France, where the slopes are assessed for their carrying capacity and the suitable number of vines are planted. ...read more.

These artificial slopes require the necessary knowledge to prevent potentially serious hazards. In Aberfan, Wales, 147 people died, most of them children, due to the instability of a coal mine spoil heap. Since then, Grace Lau spoil heaps have been reduced in gradient to stop the occurrence of similar events. The frequency of human-induced disasters seem to outweigh the naturally occurring accidents and therefore, better consideration of the uses and effects of slopes need to be contemplated in order to address this and end such events. But, with current successes in managing slopes, the revaluation of certain schemes and ideas are required in order to increase the number of successes. The hazards often cause a loss of lives, property damage and countless problems and the awareness and knowledge of the danger of disasters, natural or caused by human activity, can be the best prevention of them. Hill slopes and vegetation play a critical role in defining slope stability and the removal of vegetation needs to be considered to an appropriate extent. The importance of planning in terms of human activities needs to be emphasised in order to minimise hazards. ...read more.