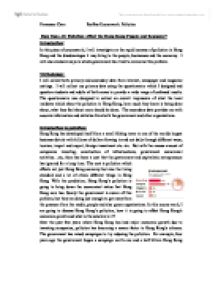 How Does Air Pollution Affect the Hong Kong People and Economy?

How Does Air Pollution Affect the Hong Kong People and Economy? Introduction: In this piece of coursework, I will investigate on the rapid increase of pollution in Hong Kong and the disadvantages it may bring to the people, businesses and the economy. I will also evaluate ways in which government has tried to overcome this problem. Methodology: I will collect both primary and secondary data from internet, newspaper and magazine cuttings. I will collect my primary data using the questionnaire which I designed and question students and adults of both sexes to provide a wide range of unbiased results. The questionnaire was designed to collect an overall impression of what the local residents which about the pollution in Hong Kong, how much they know is being done about, what they feel about more should be done. The secondary data provides me with accurate information and statistics from both the government and other organizations. Introduction to pollution: Hong Kong has developed itself from a small fishing town to one of the worlds largest business district with billions of dollars flowing in and out daily through different ways; tourism, import and export, foreign investment etc. etc. But with the excess amount of companies investing, construction of infrastructures, government economical activities...etc, there has been a cost that the government and capitalistic entrepreneurs has ignored for a long time. This cost is pollution which effects not just Hong Kong economy but also the living standard and a lot of others different things in Hong Kong. With the prediction, Hong Kong's pollution is going to bring down the economical status that Hong Kong now has. Surely the government is aware of this problem, but they are doing just enough to get away from the pressure from the media, people and also green organizations. In this course work, I am going to discuss Hong Kong's pollution, how it is going to affect Hong Kong's economic growth and what is the solution to it? ...read more.

Therefore production should be cut. The optimum point is there the two graphs meet. It is in theory that the amount of costs created is equaled to the amount of benefits gained. eg. New developments such as the Hong Kong Disneyland have significant effect on Lantau's pollution. But because the marginal social benefits (attract tourism etc) exceeds the marginal social costs (pollution), it is therefore reasonable to build Disneyland. What solutions are there to reduce pollution? There are many possible ways in which pollution can be reduced and controlled. Fines and regulations, tax, subsidy, improve education, technology and tradeable permits. But the government has to decide within ones which are the most beneficial with least side effects. Technology: The development of modern technology could control the pollution level. A few years ago, the government introduced the LPG taxi which will cause less pollution. The government will also start replacing most of the light vehicles, mini-buses...etc to use LPG instead of diesel. Although it will reduce the pollution of Hong Kong, but because of the LPG station is costly and inconvenient to build, it is hard for owner of light vehicles', mini-buses' and taxis' to change their cars into LPG cars. It is expensive to do so. But the government is therefore investing $1.4 billion to help owners to switch from diesel to cleaner LPG engines, and to control the remaining diesel emission. Subsidy: Looking at the supply and demand diagram for subsidies we can see that as the government provides a subsidy for a good, the quantity of the good increases as the extra money which firms have got from government allows them to produce more. The price for consumers also decreases because the amount in the reduced price is already paid by the government. By placing a subsidy on goods, the government encourages the production of this good. Therefore the government would usually place a subsidy on goods which are more environmentally friendly so more are created and the price is relatively lower than other goods of the same sort. ...read more.

One of its advantages is it is not fairly costly as it could be taught in school the basics of pollution. By adding more public transport hypothetical should encourage people to travel less using private vehicles but if the plan does not work out as intended, it could actually cause a larger amount of pollution. To support the addition of public transport, government could also decrease its prices further encouraging its use. Conclusion: Pollution is more of a problem in Hong Kong now than it ever was. But I feel that the government is not the only one to blame for the increase in pollution over the years. The Hong Kong government has not done much to stop pollution, and whenever it has held campaigns against pollution, they have not been as successful as planned. It is very easy to blame the government pupil. But I feel that the people in Hong Kong have also not done much to help the situation. Even after knowing the poor situation of pollution in Hong Kong, the people of Hong Kong have continued to leave their car engines on while parked releasing immense amount of exhaust. To make sure that the people of Hong Kong do their bit to reduce pollution, it is essential for the government to educate people more about the issue of pollution. I think that the citizens of Hong Kong could do much more to stop pollution. Many people in Hong Kong waste electrical energy at will and if they are more considerate and cut down on the use of electrical energy, pollution can be reduced as the production of electrical energy releases many types of gases into the atmosphere. If people in Hong Kong do their bit and the government increases their spending on trying to reduce pollution, I am sure that the pollution in Hong Kong will definitely decrease. Appendixes (Secondary Data) http://info.gov.hk/eindex.htm http://hk.yahoo.com http://www.cleartheair.org.hk/ http://www.yp.com.hk/ Nuffield Economics and Business Textbook Complete A to Z Economics Hand Book Economics: A Complete Course Primary Data (Please Turn Over) Surveys Interviews ?? ?? ?? ?? Francesco Chan EcoBus Coursework: Pollution ...read more.