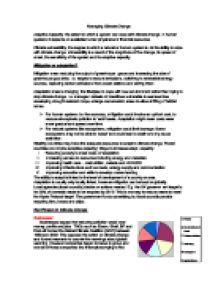 Managing Climate Change Adaptive Capacity: the extent to which a system can cope with climate change. In human systems it depends on available human physical and financial resources. Climate vulnerability: the degree to which a natural or human system lack the ability to cope with climate change. Vulnerability is a result of the magnitude of the change, its speed of onset, the sensitivity of the system and its adaptive capacity. Mitigation or adaptation? Mitigation mean reducing the output of greenhouse gases and increasing the size of greenhouse gas sinks. I.e. targets to reduce emissions, switching to renewable energy sources, capturing carbon emissions from power stations and storing them. Adaptation means changing the lifestyles to cope with new environment rather than trying to stop climate change. I.e. managed retreats of coastlines vulnerable to sea level rise, developing drought resistant crops, enlarge conservation areas to allow shifting of habitat zones. > For human systems i.e. ...read more.

This is because of factors such as: > Moral and public pressure to protect and not destroy the environment > Fears about energy supply > Increased moves by governments towards taxing carbon emissions > Demands from investors, such as pensions funds, for companies to become environment sound > Renewable energy, hybrid cars and energy efficient appliance, which represent new markets The stern review concluded that it was more sensible to invest in mitigation today than 'do nothing' and face the costs of at least 5% and possibly 20% if global annual GDP. MITIGATION COSTS (PREVENTING CLIMATE CHANGE NOW) 'DO NOTHING' COSTS (COPING WITH CLIMATE CHANGE FOR THE FUTURE) IMPLEMENTING ENERGY-EFFICIENT TECHNOLOGY INCREASED COST OF FARMING AND FOOD SWITCHING TO RE-NEWABLE ENERGY SOURCES, WIND, SOLAR, BIOMASS MIGRATION, AND DEALING WITH ENVIRONMENTAL REFUGES INVESTING IN PUBLIC TRANSPORT SYSTEMS TO REDUCE CAR USE AND INVESTING IN LOW-EMISSION TRANSPORT TECHNOLOGY INCREASE AID IF CLIMATE DAMAGES FOOD SECURITY TAXES ON CARBON EMISSIONS FOR BUSINESSES & INDIVIDUALS INCREASED HEALTHCARE COSTS; DEALING WITH SPREADING DISEASE COSTS SUCH AS MALARIA CAPTURING AND ...read more.

* Buying locally produced food * Switching your energy supplier to one using renewable sources * Energy efficiency in the home, such as using energy efficient light bulbs. Switching every light bulb in London to energy efficient ones would save 575,000 tonnes of CO2 emissions every year. However issues with it are, that asking everyone to reduce their emissions, while some people may have already low carbon footprint than the average. Millions of people in the developing world do not consume enough to have even a reasonable quality of life - would they need to consume more rather than fewer? This has led to the contraction and convergence model - allows poorer countries to increase their emissions, while developed countries reduce theirs. Advantages of this model include: > Allowing countries such as china and india to continue to develop and perhaps overcome their objections to limiting their own emissions > Implies that resources need to be shared out more fairly. > Recognises that over-consuming nations need to reduce their footprints. ?? ?? ?? ?? ...read more.