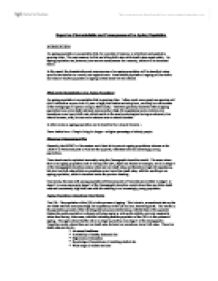 Report on Characteristics and Consequences of an Ageing Population

pensions The economic problems caused by an ageing population are:- * Rising tax burden - the younger population must pay higher taxes to support the pensions, increased healthcare costs etc of the ageing population * Shifts in consumer demand - industries and firms must change what they produce In order to produce something popular among older people - can lead to Business being uncompetitive in international markets where consumers are younger * Labour shortages - less younger people available to take up the jobs vacated By retiring older population can lead to quality of workforce being lessened as Companies are forced to take on less able workers to replace the higher quality Ones who have retired and also the decrease in production capacity of UK - harms Economy - reduces profits and spending of country The Demographic problems of an ageing population are:- * Falling population (eventually) when the older people eventually die there is less Babies being born to replace them, therefore the population begins to fall * Changing nature of dependency - there will eventually be an increase in the % of The population above working age, with a reduced amount of people of working Age to support them due to the low birth rate of the country - a higher dependency ratio - this potentially results in higher taxes and more spending by the government to try and support this ageing population, with ...read more.

problems on a local scale of an ageing population:- * Falling population - when old people eventually die, not enough babies are being born to replace them * Young people are forced out for various reasons, further increasing % of older population * Low birth rates However there are some advantages to an ageing population on a local scale:- * Money is brought into area by migrating old people who are fairly well off * Rise in house prices - good for sellers * Fall in unemployment - as there is less numbers of people of working age to fill the probable subsequent increase in jobs available The problems (and advantages) above are what Seaton, and other similar South coast resorts must now face, and are what Swindon and other similar (demographically) towns/cities will probably eventually have to face in the future Conclusion * MEDC's generally have more ageing population than LEDC's BUT - it is probable that LEDC's in their futures will also have ageing population * The problems faced on an international scale are generally the same problems as faced in more local areas, but simply on a much bigger scale * Causes of ageing populations different in more local areas it is generally caused by migrations of older people, but on an international scale it is almost entirely the result of demographics, as shown in the Demographic Transition Model ?? ?? ?? ?? ...read more.