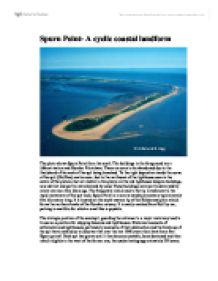 Spurn Point- A cyclic coastal landform The photo shows Spurn Point from the south. The buildings in the foreground are a lifeboat station and Humber Pilots base. These are soon to be abandoned due to the likelyhood of the neck of the spit being breached. To the right deposition inside the curve of the spit (Old Den) can be seen. Just to the northwest of the lighthouse seen in the centre of the picture, but not visible in this photo are the old lighthouse keepers buildings, now derilict and partly overwhelmed by sand. These buildings were partly destroyed by winter storms a few years ago. The frequently relaid road to the tip is testament to the rapid movement of the spit neck. ...read more.

Each spit has grown until it has become unstable, been destroyed and then rebuilt slightly to the west of the former one, the cycles lasting approximately 250 years. The current spit is nearing the end of the cycle, and despite considerable coastal defences the neck is in continual danger of being breached. To the east lies the North Sea. The direction of maximum fetch is from the north-east and longshore drift is southward. To the north west is the low plain of Holderness. This is composed entirely of glacial till filling a former embayment. (see the paleo-cliff at ewerby The glacial till cliffs of Holderness are rapidly eroding. Note the proximity of the farm to the cliffs, such buildings are frequently falling into the sea! ...read more.

As deposition occurs the spit elongates and sand passing around the tip causes the tip to elongate. Thus far we have a fairly standard spit formation mechanism. What makes Spurn Point interesting from a geomorphological perspective is the cyclical nature of the feature. This is due to the dual processes of spit formation and rapid coastal erosion. The spit grows southwestwards, at the same time the neck of the spit must move westwards due to the erosion of the coastline. Eventually a landform similar to the current situation evolves with an attenuated neck and a bulbous tip. A point is reached where the neck becomes vunerable to destruction by north-easterly gales and when the neck is breached swatchways develop and the spit is rapidly destroyed. Once this has happened the stage is set for the cycle to begin again, a little to the northwest of the former spit. ...read more.