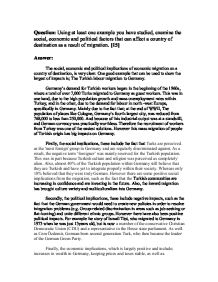 The effects of Turkish labour migration to Germany

Question: Using at least one example you have studied, examine the social, economic and political factors that can affect a country of destination as a result of migration. [15] Answer: The social, economic and political implications of economic migration on a country of destination, is very clear. One good example that can be used to show the largest of impacts is; The Turkish labour migration to Germany. Germany's demand for Turkish workers began in the beginning of the 1960s, where a total of over 7,000 Turks migrated to Germany as guest workers. This was in one hand, due to the high population growth and mass unemployment rates within Turkey, and in the other, due to the demand for labour in north-west Europe, specifically in Germany. ...read more.

Also, almost 40% of the Turkish population within Germany still believe that they are Turkish and have yet to integrate properly within their society. Whereas only 18% believed that they were truly German. However there are some positive social implications from the migration, such as the fact that the Turkish communities are increasing in confidence and are investing in the future. Also, the inward migration has brought culture variety and multiculturalism into Germany. Secondly, the political implications, these include negative impacts, such as the fact that the German government would need to create new policies in order to resolve integration problems (e.g. Group-related discrimination in areas such as job-seeking or flat-hunting) ...read more.

However there are also some negative economic effects, such as the need for the government to put more money into services, like schools and hospitals, in order to meet the new demand. In conclusion, I believe that the positive effects of the labour migration took place in the first few years, however as time went on, the German population began to witness negative impacts of the Turkish labour migration, mainly the lack of integration. This is largely due to the fact that the government believed that it was only short term migration (guest workers) and therefore were not prepared for the consequences. The possible solutions that could be put on place are; more integration policies in order to reduce the tension between the Turks and the Germans. ?? ?? ?? ?? ...read more.