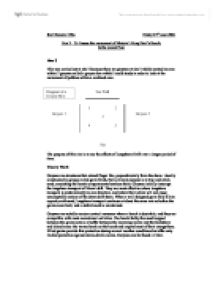 To Assess the movement of Material Along Deal's Beach, in the recent Past.

Karl Bowers 11Bu Friday 25th June 2004 Aim 3 - To Assess the movement of Material Along Deal's Beach, In the recent Past. Aim 3 This was carried out at site 3 because there are groynes at site 3 which created an area within 2 groynes called a groyne box which I could study in order to look at the movement of pebbles within a confined area. The purpose of this aim is to see the effects of Longshore Drift over a longer period of time. Theory Work Groynes are structures that extend finger like, perpendicularly from the shore. Usually constructed in groups called groin fields, their primary purpose is to trap and retain sand, nourishing the beach compartments between them. Groynes initially interrupt the longshore transport of littoral drift. They are most effective where longshore transport is predominantly in one direction, and where their action will not cause unacceptable erosion of the down drift shore. ...read more.

We did this for 10 pebbles at each position in the groyne box (in total, 50 pebbles). The group then all moved on and repeated the same process in at least 5 other groyne boxes along Deal beach. The angularity and size of stones: Very Angular Angular Sub-angular Sub-rounded Rounded Very rounded Tiny jagged edges Longer jagged edges. Jagged and rounded edges Uneven, but no jagged edges A little uneven Round or oval This fieldwork method was chosen in an attempt to procure a representation of pebble size and shape over as wide an area of the groyne box as possible. Hence the importance of working as a team. Limitations Difficulty of obtaining a random sample: * Subjectivity of angularity choice * Difficulty of standing in the same place for each groyne box position for each box studied * Chance that other factors may have altered pebble accumulation on the beach other than Longshore Drift e.g. ...read more.

The average height are between 2 and 6 with the odd anomalies, which are possibly from putting in the wrong measurement. Conclusion I can conclude from my results that longshore drift was taking place on the day of our visit. The longshore drift was shaping and moving the stones between the groynes on the day of the visit, along with the past. Relation to Hypothesis The hypothesis was 'to see if Deal is being shaped more due to the process of L.D (if we found L.D present on our visit) or by human activity on the beach' and to the fact that longshore drift was moving and shaping the pebbles, then it has been shaping the beach. Due to beach nourishment however, it was hard to see that the pebbles at the back were large and angular and the pebbles at the front were small and rounded, so we couldn't really tell if the longshore drift was having a large effect on shaping Deal Beach in the past and the day of our visit. ...read more.