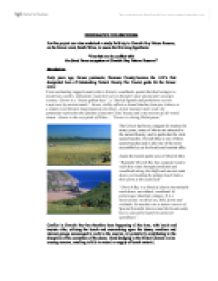 &quot;Tourists are in conflict with the Sand Dune ecosystem at Oxwich Bay Nature Reserve&quot;.

GEOGRAPHY COURSEWORK For this project our class undertook a study field trip to Oxwich Bay Nature Reserve, on the Gower coast, South Wales, to assess the following hypothesis: "Tourists are in conflict with the Sand Dune ecosystem at Oxwich Bay Nature Reserve" Introduction Forty years ago, Gower peninsular, Swansea County, became the U.K.'s first designated Area of Outstanding Natural Beauty. The Tourist guide for the Gower states: Conflict in Oxwich Bay has therefore been happening all the time, with locals and tourists alike, utilising the beach and encroaching upon the dunes; ramblers and interest groups encouraged to walk in the reserve, all potentially contributing to the disruption of the ecosystem of the dunes. Sand dredging in the Bristol Channel is also causing concern, resulting in falls in natural re-supply of beach material. SECTION 1 Introduction to Oxwich Bay Area Why the Oxwich Bay area is important Background to the area Oxwich Bay itself was formed about 100 million years ago when the sea eroded the soft shales lying between the harder limestone rocks, which can still be seen exposed at Oxwich Point and Great Tor. The sand, forming the dunes, originated in the Bristol Channel, where it was deposited during the Ice Age. During the last glaciation, as many as 6 to 8000 years ago, sea level as a whole was much lower than it is today; with this the Bristol Channel was abridged to a large river in the centre of a large plain. ...read more.

More risk from "blow out" due to wind erosion. * Dune Slacks - Flat marshy areas at sea level so salt marsh generally; final change of vegetation (e.g. trees), "Climax Community". Methodology for Undertaking Dune Transects The survey was undertaken on one weekday during early June 2003. The class were broken up into groups of five and two transects chosen by each of the groups. During the whole day the group experienced torrential rain that hampered efforts to record the data being obtained. Photographs were to be taken of important and interesting aspects of our study work and of the dune features and management techniques. Unfortunately the rain ruined my camera and I have no photographs to illustrate this coursework. On our trip to Oxwich Bay we recorded various data, the data we were looking for was sorted into primary (being the most important) and secondary (not so important). Primary Data Secondary Data Angle of slope The distance from front of dune Estimated soil depth %age of ground covered with vegetation Number of vegetation species Dominant species To achieve the Primary Data 1) To measure slope angle and distance the group had ranging poles, a tape measure and a trigger operated clinometer. 2) Ranging poles were placed to form the ends of five metre baselines, stretching up to fifty metres from the seaward edge of the dunes. 3) To achieve the accuracy of measurement setting up the base lines, the group used tape measures stretched across the ground to measure off five metres at the end of each baseline. ...read more.

* Vegetation Cover - (Fig 1:12) -The graph suggests that there is no relationship between soil depth and vegetation cover, only that a lot of points at 100% cover occur over the estimated depths of soil cover, ranging from 10cm to 30cm. For depths of soil less than 10cm a relationship might appear, as it would be expected that a point would arise where soil depth did reflect the density of growth. However the production of soil might be less where grasses such as marram are present, because these grow predominantly in sand. * Species - (Fig 1:13) There are more species with more soil depth but the trend is poor and there is a lot of scatter in the data. Vegetation Cover- * Distance - (Fig 1:14) -A good relationship that indicates the amount of vegetation cover on the ground increases quickly over the measured distance, it can be seen that from 15m along Transect 2 there is a noticeable trend with all points lining up on a smooth curve, with one exception. This point could suggest a small blow out or a footpath Species - * Distance- (Fig 1:15) - It can be quickly seen that the number of species increases with distance along the transects. Tables 1 and 2 confirm that the predominant species was marram in the early sections that also have the steepest slopes and less soil cover. Other grasses become predominant, further along the transects. FIGURE 1:8 FIGURE 1:9 FIGURE 1:10 FIGURE 1:11 FIGURE 1:12 FIGURE 1:13 FIGURE 1:14 FIGURE 1:15 ...read more.