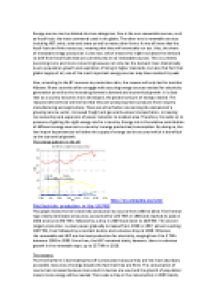 ﻿Energy sources can be divided into two catogories. One is the non-renewable sources, such as fossil fuels, the most commonly used in the globe. The other one is renewable sources including HEP, wind, solar and wave as well as many other forms. As we all know that the fossil fuels are finite resources, meaning that they will eventually run out. Also, the share of renewable enegy production is very low, which means this might not allow the demand to shift from fossil fuels that we currently rely on to renewable sources. This is currently becoming more and more concerning because not only has the demand risen dramatically due to population growth and aspiration of living in higher standards, but also that fact that global supply of oil, one of the most important energy sources may have reached its peak. Also, according to the BP reserves-to production ratio, the reseves will only last for another 40years. Many countries often struggle with securing energy sources needed for electricity generation as well as the increasing domestic demand and economical growth. It is clear that as a country becomes more developed, the greater amount of energy needed. ...read more.

and petroleum (37 per cent). In 1990, the split between fuels was similar to that in 1980; however by 2000 with changes in electricity generation, natural gas consumption had become the dominant fuel responsible for 41 per cent of all energy consumption in the UK, whilst solid fuels had fallen from 31 per cent in 1990 to 17 per cent in 2000. By 2011 more renewable fuels had entered the energy mix for both electricity generation and bioenergy consumption. The reasons The fuel consumption was dominated by coal in 1970s because at that time there were abundant amount of sources and most of them are easily accessible meaning they are not too deep to extract. Also, there were not as much awareness of environmental concerns such as air pollution or the destruction of depleted area. Futhermore, coalmining was the country?s biggest industry. Most importantly, the costs were very cheap. There were not as much gas produced in 1970s partly due to the sources in north sea were not found yet and the prices were higher. The consumption of gas has noticeably increased because the UK obtain the reserves in the north sea and even after reaching its peak the government still encourages small-scale company to deplete the remaining. ...read more.

There is a slight growth in the HEP, nuclear, and other renewable generation over the past 10 years as well. IEA data for 2009 indicate that the electrification rates for India were 66 percent for the country as a whole. Ninety-four percent of the 404 million that do not have access to electricity live in rural areas where electrification rates are approximately 50 percent. With such increasing demand for energy due to population growth and higher living standard in urban areas, importation will be definitely needed. To conclude, both countries the UK and India have high reliance on thermal forms of energy and both facing problems with the limited available sources. However, the situation is much more severe in India where in the countryside there are often blackouts. The UK?s consumption is increasing, however at a much slower rate compared to India and this worsens the electricity shortage. The UK?s generation is more or less self-suffient but becoming more relied on importing natural gas whereas in India although they are the fourth largest coal producer, they import many fossils. The future solution may be shifting the reliance on fossil fuel to other forms of energy that is sustainable and renewable or increase the efficiency in obtaining energy. ...read more.